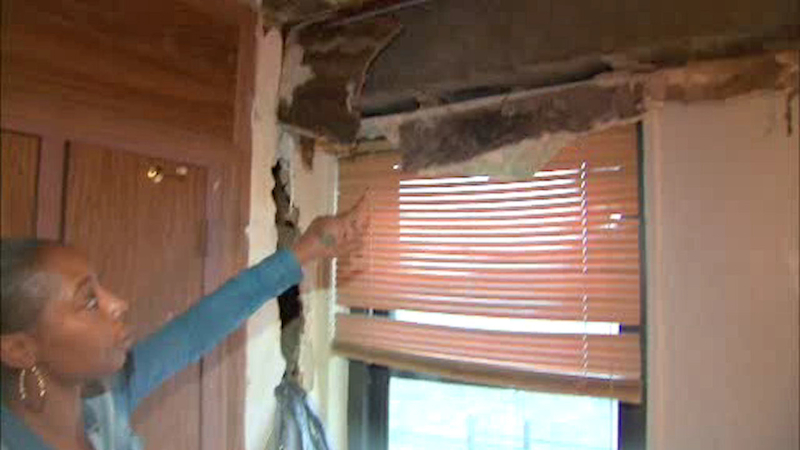 NYCHA repairing crumbling apartment, but trouble far from over

EAST NEW YORK, Brooklyn (WABC) -- Workers are finally making repairs to a moldy, crumbling mess inside a NYCHA apartment that we first told you about Wednesday on Eyewitness News. But for the family that calls it home, the trouble is far from over.

Work is underway in Regina Pridgen's apartment building in the Glenmore Plaza Homes, but overnight, she said things went from bad to worse.

"My chest is still as tight as when I first came into the urgent care," she said.

Pridgen has spent the better part of the day in an urgent care facility, being treated for asthma she claims was made worse by the mold in her apartment.

"I'm pretty sure it's all those mold spores," she said. "I've had asthma for 29 years, and the only time my asthma has acted up is when I'm sick. And I'm not sick."

On Wednesday, she showed Eyewitness News the unbelievable mold and water problem that brought down the ceiling and created a dangerous health hazard in the bedroom where her two boys sleep. It is a problem, she claims she's been battling to have repaired for three years.

But then, when NYCHA workers pulled out a section of pipe, Pridgen said the problems got worse.

"Them tracking in and leaving the door open, it creates more spores," she said. "It allows them to travel throughout the house."

NYCHA called the conditions "absolutely unacceptable" and began larger repairs immediately. But after she was asked to remove items from the room, Pridgen nearly passed out.
"I started to move the stuff out of the closet," she said. "I really really couldn't breathe."

Community activist Tony Herbert spoke up on her behalf.

"Knowing what they had to do in that apartment, know that the particles were going to fly, move them into a hospitality apartment immediately," he said.

Herbert has been trying to help Pridgen in hopes that NYCHA could provide her with another apartment.

"We need to get this rectified and rectified quickly," he said. "And the people in the housing developments deserve respect."

In the meantime, Pridgen sent her two boys, ages 9 and 4, to school and will stay with her mother until she feels she can safely return.