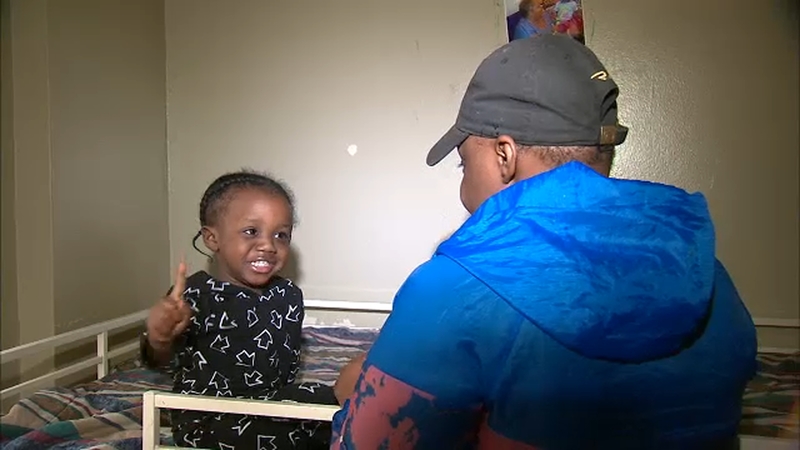 EAST HARLEM, Manhattan (WABC) -- One mom's nightmare was caused by heating pipes without insulation in her child's bedroom and now she wants to know why the city didn't help.

Earlier this month, Ciera Williams' 2-year-old son was so badly burned he went to the hospital. She says she reported the incident, but nothing has been done.

"I just hear him scream, and my daughter screamed, so I ran back here," Williams said. She smelled her son's scorched skin first.

"This is his actual skin on the pipe," Williams said. The thigh of her 2-year-old son, Jeremiah, was singed raw after he fell against the heating pipe in his sister's room. His mom rushed him to Cornell Burn Unit where it was determined the toddler suffered 2nd and 3rd-degree burns.

"This pipe is scorching hot," Williams said. "If I put my hand on it, I'm going to get burned too. They (NYCHA) were supposed to wrap this because we have minors but they never did."

Williams is referring to a letter sent months ago from the New York City Housing Authority -- that workers would be coming around to wrap protective insulation around the pipes before the boiler would be turned on mid-October. But NYCHA disputes that, saying it "did not distribute any letters for notices to residents regarding insulation/wrapping for apartments."

Williams says the day after Jeremiah's burns, she reported the problem to her building's management office at the George Washington Carver Houses, a public housing unit in East Harlem maintained by NYCHA.

"I told them what happened to my son," Williams said. "They said someone would come out the next day or maybe even tonight. That was last Friday."

After a week passed and no one showed up, Williams called 7 On Your Side.

We wanted to see exactly how hot the pipe was. So we got a meat thermometer and pressed it against the spot where Jeremiah was burned. The thermometer read 175 degrees.

"I was furious because this all would have been avoided if they came to wrap up the pipe," Williams said.

What was puzzling was 7 On Your Side saw a NYCHA maintenance crew outside with a bag of pipe insulators. But it wasn't until we emailed a picture of Jeremiah's burns that NYCHA sent a crew to Williams' apartment for the safety fix.

She says within hours of the 7 On Your Side email, NYCHA's crew wrapped all the exposed heating pipes in her apartment.

A NYCHA representative said in a statement that any families with problems should contact their management office.

Jeremiah has a follow-up appointment with the Cornell Burn Unit to see if he needs a skin graft.

If using the app, click here to send us a news tip
Report a correction or typo
Related topics:
east harlemmanhattannew york citynychachild injured7 on your sideburn injuries
Copyright © 2022 WABC-TV. All Rights Reserved.
7 ON YOUR SIDE
7 On Your Side, congressman team up to save homeowner from foreclosure
Dozens of campaign workers owed thousands by candidate for NY governor
$66,000 in life savings frozen by bank for over half a year
Best money moves to deal with mortgage rate hike
TOP STORIES
Woman walking with baby stroller shot to death in Manhattan
Mother, half-brother facing murder charges in 7-year-old girl's death
New York to limit where guns can be carried, Hochul says
LIVE | Eyewitness News This Morning
Man snaps pic of vintage Burger King walled-off inside Delaware mall
AccuWeather: Very warm
Where to watch 2022 Fourth of July fireworks
Show More
Talks continue as AC casino strike deadlines loom
Prayer vigil held in support of detained WNBA star Brittney Griner
NYC's pandemic exodus ending could push rents even higher
R. Kelly sentenced to 30 years on sex trafficking conviction
Police search for man after 3 people found dead inside Queens home
More TOP STORIES News
Send us your questions, issues, and story ideas to Nina by filling out the form above, by emailing 7OnYourSideNina@abc.com, or contact Nina on her Facebook page or tweet her at Twitter @7OnYourSideNY! You can also call the 7 On Your Side Hotline at 917-260-7697.