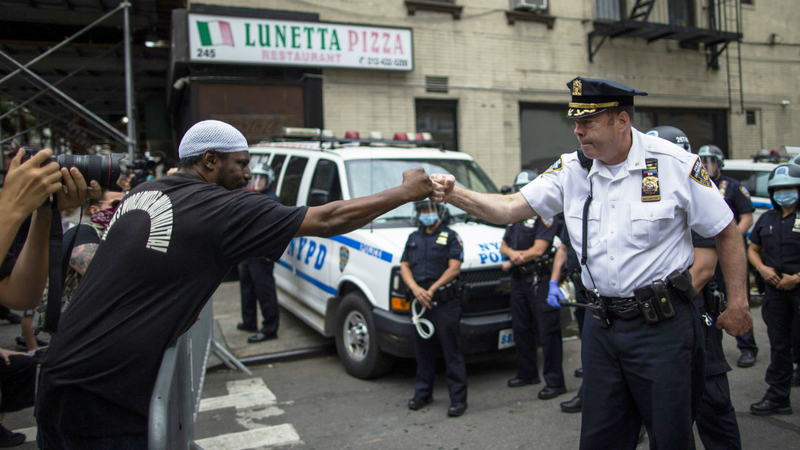 NEW YORK CITY (WABC) -- New York City's top cop called for calm amid days of protests and unrest across New York City, and also apologized on behalf of the department for the NYPD's "part in racial bias."

Along with peaceful demonstrations, there have been smash-and-grab sprees and a string of assaults on police officers in the wake of the death of George Floyd.

The stabbing of an officer in Brooklyn Wednesday was one of multiple assaults on police officers in recent days, including a driver plowing into a sergeant in the Bronx, a lieutenant struck in the helmet by a brick during a brawl in Manhattan, a Molotov cocktail thrown into a van full of officers in Brooklyn, and gunshots fired at an occupied police cruiser in Queens.

At the same time, police have been criticized for harsh tactics to corral protesters and enforce the curfew. More than 350 current and former members of Mayor Bill de Blasio's administration published an open letter Thursday denouncing brutality, such as officers swatting protesters with batons, a police vehicle driven into a crowd and an officer seen throwing a woman to the ground.

Commissioner Dermot Shea spoke at a news conference Thursday that opened with a broadside against elected officials and others whom he blamed for stirring up animosity by speaking against police and sharing videos on social media that, presented without context, are seen as evidence of officer misconduct.

Dermot Shea called for calm amid days of protests and unrest across New York City.

He said use of force is often justified, but that the NYPD is reviewing about seven instances that may result in discipline. Shea said without a doubt, there will be a couple of officers suspended.

"Before you start commenting on a six second video do a little homework," Shea said.

But the commissioner continued to apologize for the what he referred to as many other mistakes.

Shea said the department has worked to fundamentally change policing over the last seven years, including reducing arrests and summonses and increasing training.

"How do we move forward?" Shea said. "I do not know how we will get there. I wish I had all the answers, but I know this much. We cannot reach that place until we end the hateful speech and the law breaking and the unprovoked attacks against police officers and the rhetoric that fuels."