3 brothers join father on the force as NYPD adds more than 1,100 cadets 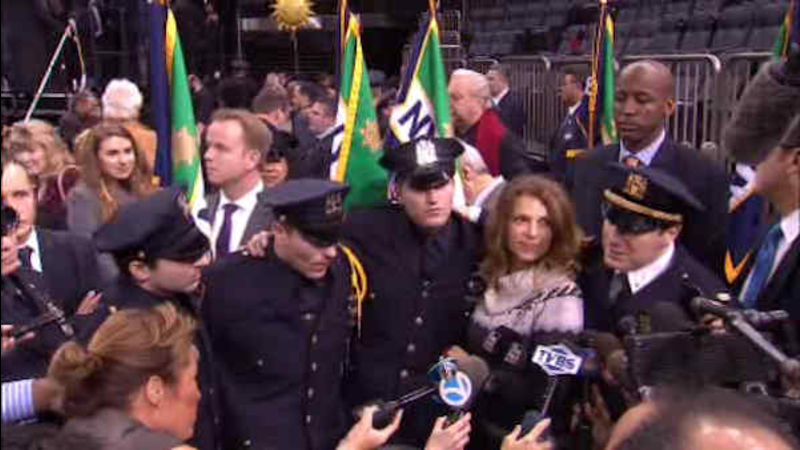 3 brothers join father on the force as NYPD adds more than 1,100 cadets

NEW YORK (WABC) -- The New York Police Department welcomed more than 1,100 new officers Tuesday, but for three of them, the job is all in the family.

"We're humbled by all of this, and we really appreciate it," Police Academy graduate Alec Favale said.

Exactly 1,123 cadets officially became NYPD officers at the ceremony, but what was downright unique is that brothers Alec, John and Stephen were among the group, with their dad, Deputy Inspector Anthony Favale, cheering the whole time.

"We're overjoyed and overwhelmed by the attention," said the proud father, a 30-year veteran of the force.

They're a tight-knit family, and Anthony says that growing up, his boys never gave him an ounce of trouble. They didn't sit together during the ceremony, but Alec said that was OK.

"We could use some space from each other every now and then," he said. "So this was good."

But after, they were once again a unit, their mom Stephanie clearly over the moon.

Mayor Bill de Blasio saluted all the cadets for joining the nation's biggest police department. He added special thanks to the Favales for their "family tradition" of service.

Anthony gave his patrolman's badge to John, who graduated with honors, and shared a bit of the backstory on how his kids ended up here.

"John, since he was a little boy, he always wanted to be a cop, so he was destined for it," he said. "Stephen and Alec, while all college graduates, Alec was focused on finance, Stephen on business communication. And I told them to do exactly what I did. This was my backup plan. I should have been a chiropractor."