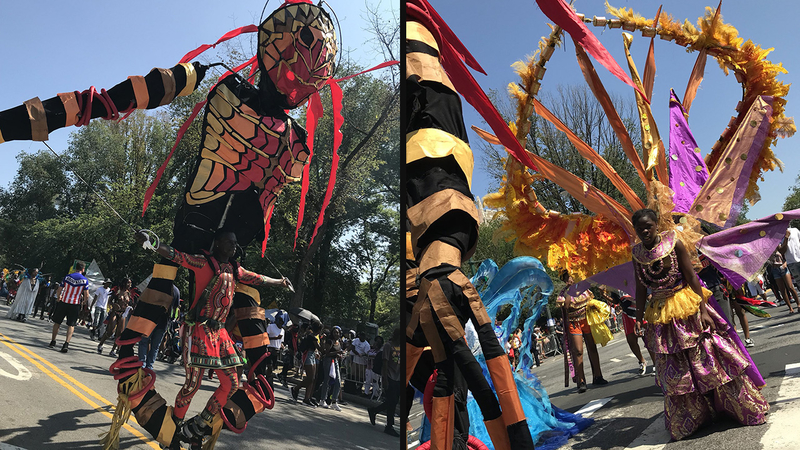 It was a celebration of Caribbean culture and freedom of speech surrounded by a visible NYPD presence. Thousands danced their way down Flatbush Avenue for J'ouvert in the early morning parade commemorating the emancipation of Caribbean slaves, followed by flags waving, music blaring and feet dancing in the annual parade that followed.

"I'm having fun," one child said. "I'm seeing a lot of people with their joy, the oil and the music."

The event started later than in past years, at 6 a.m., and there was extra security in place because of violent incidents that happened in the past.

Three years ago, Cary Gabay, an aide to Governor Andrew Cuomo, was even shot and killed. Two people were killed in 2016, and there was at least one shooting last year. The event now includes 13 entry checkpoints to keep weapons and alcohol out.

"It's so big and everybody's enjoying it," one participant said. "And you don't want someone to get the wrong idea and try to ruin it, so we have the protection we need."

Others found it excessive.

"I think it's a little over the top," another parade goer said. "Anytime black people are congregated together, there always seems to be an excessive amount of force."

The security is tighter than it's ever been, with 4,000 police officers deployed. There were some reports of some violence in the hours leading up the start, with a shooting happening nearby that was not believed to be connected to the event.

The city's Caribbean community has held annual Carnival celebrations since the 1920s, first in Harlem and then in Brooklyn, where festivities happen on Labor Day.

The festivities start with J'ouvert, which comes from the French words "jour" and "ouvert" and means daybreak. Meant as a celebration of emancipation from slavery, it features revelers who cover their bodies in paint or oil, wear helmets with giant horns, and toss talcum powder into the air. The highlight is a parade of steel pan bands.

J'ouvert was once only loosely organized and began in the dark, hours before dawn, in a Brooklyn neighborhood still dealing with gang violence. Late-night shootings were a concern for years, but outrage grew fervent in 2015, when Gabay died after he left his Brooklyn home to attend the festivities and was hit by stray gunfire.

At Monday's main parade, spectator Arnold Cherry, 76, said, "We want the parade to be safe, so it's necessary to have them here. This is supposed to be more free flow and free spirit, but we don't want violence to get in the way of the parade continuing. We can't have one incident be used as an excuse to inhibit it."

Still, said 72-year-old Trevor Lyons, "I feel it's been tempered down, it's been dampened. There used to be more vendors, more dancing, but now it's gotten too controlled."

Elected officials and those running for office came out to take part in the parade. Cuomo marked the occasion by announcing the state would put up to $15 million toward building a community center in Brooklyn named for Gabay.
EMBED More News Videos

Dave Evans reports from the West Indian Day parade where Governor Andrew Cuomo and Cynthia Nixon were in attendance.