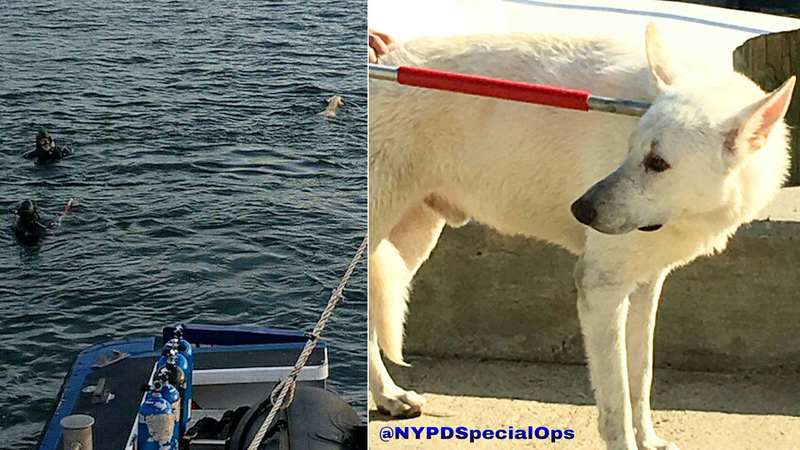 CONEY ISLAND, Brooklyn (WABC) -- A lost dog was reunited with its owner in Brooklyn Friday, thanks to the heroic actions of the NYPD.

"I was terrified. I was scared. I was just hoping he was ok," said Miguel Vazquez, the dog's owner.

Miguel is talking about his handsome one-and-half-year-old white German shepherd.

His name is Chase. He's the family dog Miguel and his brother Francisco own.

Don't worry, Chase is ok now, but boy is this guy lucky to be alive.

Let's back this story up to Thursday morning, when Chase, for the first time, ran away from his home in Coney Island.

Every morning they put Chase in the backyard and they latch a gate, then they tie the fence to the gate.

But Thursday morning, there was some bad weather and they think the thunder scared Chase and he somehow managed to squeeze through the gate and escape.
So for hours and hours Miguel, Francisco and the family frantically searched.

They checked every shelter and pet store.

At one point, they nearly gave up.

"All I was waiting for or hoping for was if a family grabbed him, that they were going to be good to him. I didn't want him to suffer," Francisco said.

But then almost 24 hours later, at 6:30 in the morning Friday, miles away from home, someone there spots Chase swimming out there in Gravesend Bay, half a mile from shore, and calls police.

Chase hung on just long enough to be pulled from the bay.

But the story didn't end there.

The NYPD still had no idea who this dog belongs to!

This morning #Harbor #SCUBA pulled this dog from the waters of Gravesend Bay. If you recognize him, call @NYPD62Pct pic.twitter.com/X149K5XRdJ

Later the wife of one of the officers saw the Facebook post the Vazquez family put up and realizes they have a match!


"For someone else's dog, they're just the heroes. I really want to thank them very much because they brought our dog home and it wouldn't have been the same without him. It would've been an empty spot," Miguel said.