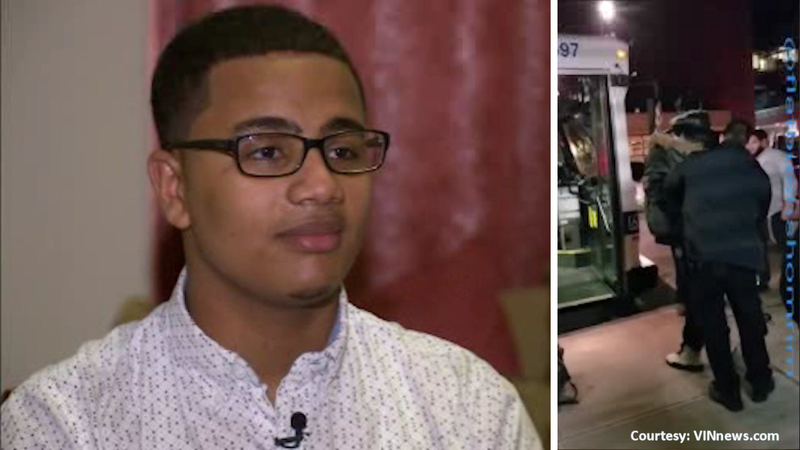 FLATBUSH, Brooklyn (WABC) -- A Muslim teenager from Brooklyn showed amazing bravery after he saw an Orthodox Jewish woman get punched by a man on the subway.

He helped police catch the suspect.

"He was all the way in the back and I was just looking at him like, knocking, and I was like, 'I see you, you can't hide, you coward,'" said Ahmed Khalifa, a Flatbush resident.

It wasn't until 31-year-old Rayvon Jones got off the B68 bus agitated and belligerent, that 17-year-old Khalifa realized that he was standing up to a guy nearly a foot taller and twice his age.

But none of that mattered at the time. He was just doing the right thing.

"She was dressed, like religiously, you could just tell she was Jewish, and I'm Muslim. And people were just confused like, you just helped a Jewish lady, like wow, it has nothing to do with the fact that she's Jewish, I just helped a lady," Khalifa said.

Khalifa was riding the Q-train in Brooklyn Tuesday night around 7, when he says he saw Jones out of the clear blue; smack an Orthodox Jewish woman in the face who was sitting near him.

"He just hit her, and when I looked at her she was bleeding, there was blood all over her face. Her glasses were on the floor, her stuff was all scattered, and she was just crying. She was on the phone and was like, 'Why would he do this?'" Khalifa said.

The Muslim teen, whose family is from the Sudan, says he followed Jones about five blocks from the Newkirk Plaza Subway Station in Flatbush, first on foot and then in a car with an Orthodox Jewish man who offered to help in the chase.

They spotted Jones hop on the B68, and called police who arrested him at Coney Island Avenue and Avenue M.

"It was very wrong, you can't do that. I just hope he gets punished longer because he deserves to stay in jail," Khalifa said.