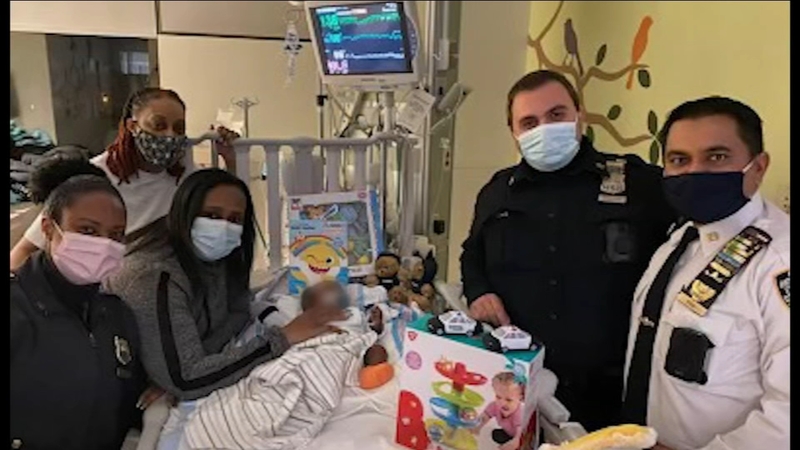 NEW YORK CITY (WABC) -- Two mothers are thanking a New York City police officer who jumped into action to save their baby Sunday afternoon after the child stopped breathing.

They're saying without the officer, their infant would not be alive.

It was supposed to be a day trip to New York City from Syracuse, and moms Latisha and Zaquarna Harper were there to pick up a stroller.

They had just crossed the Brooklyn Bridge when realized something was wrong.

In this Eyewitness News exclusive, Josh Einiger interviews the Staten Island cops who jumped into action to save a baby girl when she began choking.

"Once he went limp, I panicked," Zaquarna added.

The child is in foster care, so we are not disclosing his name. But the mothers spotted a police car and ran for help.

"I saw a lady jump out of a car, run between traffic, and came to the police vehicle and said, 'The baby's not breathing. We need help,'" Officer Dillan Krasteff said.

He darted into traffic to get to the baby, and the 9-year veteran of the force and a father himself didn't hesitate to jump into action.

They worked together to resuscitate the boy.

"We was doing it together," Latisha said. "He did the compressions. He said, 'Breathe.'"

It took specific training, which the NYPD gives to officers once every two years. And with those skills, it was only a matter of minutes before the baby was once again crying.

"I started seeing the eyes started moving, and the baby was trying to take a deep breath, so I started rubbing his stomach and back," Krasteff said.

He and his supervisor visited the boy and his foster parents in the hospital Monday night, and while the mothers live in Syracuse, they say they're forever connected to Krasteff.

"He's an angel," Latisha said. "That's our angel. Officer Krasteff is our angel. Because honestly, if he wasn't there, (our son) wouldn't be here...I hugged him, I grabbed him, I hugged him, and I just thanked him. I said, I understand we're in a pandemic, but I had to hug him."

The boy remains at the hospital, but his family says he is out of the danger zone. They also say they plan to keep in touch with Officer Krasteff so he serve as a mentor to the child.