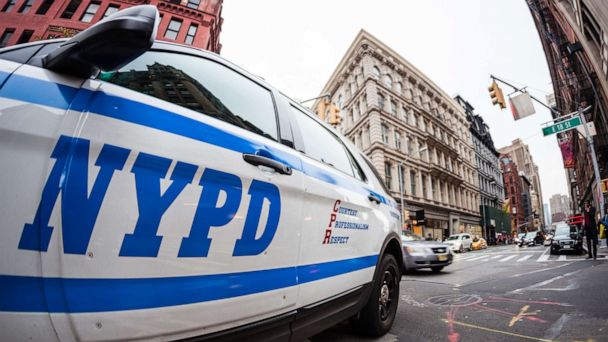 A New York City police officer was suspended without pay Sunday for promoting President Trump's reelection campaign from a loudspeaker while on patrol over the weekend.

Talia Jane, a Brooklyn-based freelance reporter, tweeted that a squad car was blaring "Trump 2020" from the officer's vehicle in Flatbush Saturday night. Jane said she was sent a video of the officers in the vehicle also shouting the chant.


"They stopped when someone started filming but couldn't resist one more," she tweeted.

Jane retweeted a second video from another Twitter user that showed the police vehicle promoting Trump from the loudspeaker.

According to the NYPD patrol guide, members on duty or in uniform are prohibited from "endorsing political candidates or publicly expressing personal views and opinions concerning the merits of: any political party or candidate for public office; any public policy matter or legislation pending before any government body; or any matter to be decided by a pubic election, except with the permission of the police commissioner."

The NYPD said Sunday it was aware of the video and investigating. Hours later the departmenttweeted that the unidentified officer in question was disciplined.

"Suspended without pay; The police officer who is under investigation for using a department vehicle's loudspeaker for political purposes has been suspended, effective immediately," the tweet said.

Mayor Bill de Blasio spoke out on the incident, promising New Yorkers "we will act fast."

"Let me be clear: ANY NYPD Officer pushing ANY political agenda while on duty will face consequences," he tweeted.

Over the summer, Pat Lynch, the president of Police Benevolent Association, the union that represents NYPD patrol officers, endorsed Trump. De Blasio was asked about the PBA endorsement during a press conference last week. He reiterated that the union president does not speak for all officers.

"I also think we've seen overwhelmingly officers leave their politics at home and they go and do what has to be done to keep people safe and to respect peaceful protest, and any officer who can't or won't do that we have to discipline," he said.
Report a correction or typo
Related topics:
abc newsnational
Copyright © 2020 ABC News Internet Ventures.
More Videos
From CNN Newsource affiliates
TOP STORIES