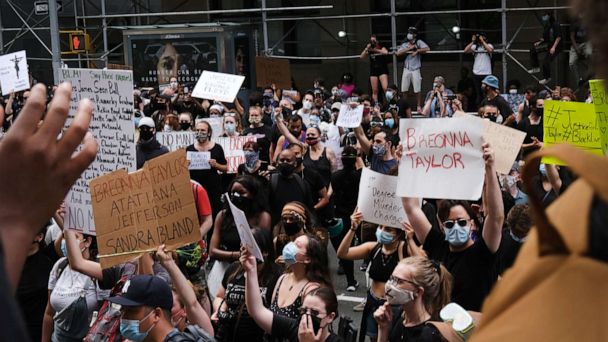 The NYPD's oversight agency has recommended the department discipline 65 officers who are accused of misconduct during last year's anti-racism protests.

The New York City Civilian Complaint Review Board received over 750 complaints concerning alleged NYPD officer conduct following the Black Lives Matter demonstrations during summer 2020, according to the agency. Only 313 complaints fell within the board's jurisdiction.

The recommended disciplinary actions are the most severe forms of punishment against NYPD officers. According to the CCRB website, charges prompt an administrative trial that may lead to lost vacation time, suspension or termination.

Command disciplines are recommended for misconduct that does not rise to the level of charges, but is emblematic of an issue more severe than poor training, according to the board. An officer can lose up to 10 vacation days as a result of a Command Discipline -- Schedule B is the more serious of the command disciplines.

CCRB review states that there have been challenges in the investigation "due to the failure to follow proper protocols, officers covering their names and shield, officers wearing protective equipment that did not belong to them, the lack of proper use of body-worn cameras, as well as incomplete and severely delayed paperwork."


An NYPD spokesperson told ABC News that the department has assisted the CCRB in its investigations by providing body camera footage and "thousands of pages of records."

"The NYPD has made significant strides and continues to work toward making our discipline processes transparent," Deputy Commissioner Public Information spokesperson Sergeant Edward Riley said in a statement to ABC News. "Like any citizen, police officers should be afforded a presumption of innocence until and unless proven guilty."

Any discipline as a result of an NYPD administrative trial will be made public in the NYPD's online discipline database, according to Riley.

In January, New York Attorney General Letitia James also filed a lawsuit against the NYPD over its handling of anti-racism protests across New York City, accusing the department of failing to address issues of abuse of power against civilians.

NYPD Deputy Commissioner John Miller told reporters at the time that the lawsuit "doesn't seem to meet the standard of a federal monitor. It doesn't seem to illustrate a pattern of practice, which is required under the law ... But we will, as with most civil lawsuits, address those assertions in court."
Report a correction or typo
Related topics:
abc newsnational
Copyright © 2021 ABC News Internet Ventures.
TOP STORIES
Ceiling collapses on firefighters battling 4-alarm UES fire
3 women sought in attacks on Jewish children in NYC
NYC Mayor-elect Eric Adams traveling to Africa to pray
AccuWeather: Snow or rain showers
2 decades later, DNA leads to arrest in teen girl's murder
NYC schools offer 2nd dose of COVID vax amid omicron concerns
NYC Corrections Department moves to 12-hour shifts due to vax mandate
Show More
Video: Suspects impersonating NYPD officers rob home in the Bronx
Pfizer to seek FDA authorization for COVID booster for older teens
8th bishop of the Diocese of Brooklyn set to be installed
NYC Hanukkah menorah lighting shines light on anti-Semitism
Tiger Woods says his days of being a full-time golfer are over
More TOP STORIES News