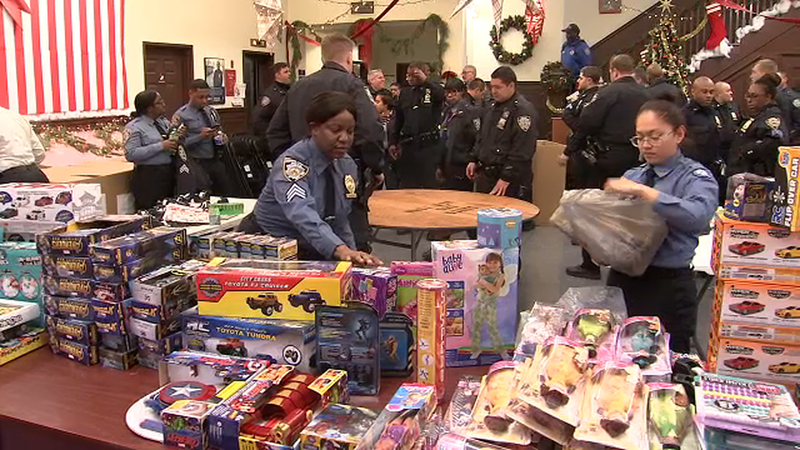 BUSHWICK, Brooklyn (WABC) -- Thousands of kids in Brooklyn received an early Christmas surprise Saturday, thanks to a team of NYPD officers.

The Patrol Borough Brooklyn North held its annual Operation Sleigh Ride, which in just a few short years has exploded into a huge community celebration.

Eyewitness News reporter Tim Fleischer got an exclusive behind-the-scenes look at the event.

Santa never had so many helpers, as for the third year, these NYPD officers from different departments and precincts in the Patrol Borough joined forces to wrap presents and plan the ambitions 10-stop route of their holiday sleigh ride, handing out toys to thousands of children.

"It's about us giving back," Assistant Chief Jeffrey Maddrey said. "Reaching out to our communities and taking care of some of those who wouldn't be able to take care of themselves this holiday season."

It all begins with Maddrey, Brooklyn North's commanding officer, and at least 100 officers from the 10 precincts in his command. Detective Kaz Daughtry is behind the planning.

"Right after Thanksgiving, it's all hands on deck," Daughtry said.

Getting an early start this year, they began to wrap presents -- thousands of them -- that were to be handed out to children. Cheval Green, a school safety officer, is one of Santa's helpers.

"We are out helping the community, giving the kids the things that they probably can't get this year," Green said. "It's a good thing."

Through generous donations from individuals, companies and organizations, they are able to fill many, many shopping carts with toys for all ages.

This year's parade, like previous years, made its way through a number of Brooklyn communities, making 10 stops to hand out gifts.

New, though, is a van of superheroes, with officers transforming into their favorite characters for the sleigh ride. Andrew Licul is Captain America.

"It's exciting," he said. "I'm happy to do it. I can't wait to get out there and see the kids smile. It's good for the community."

The effects of the event linger long after the holiday season has concluded.

"We use it all year long," Deputy Chief Charles McEvoy said. "We use the superheroes all year long. But this is the big one."