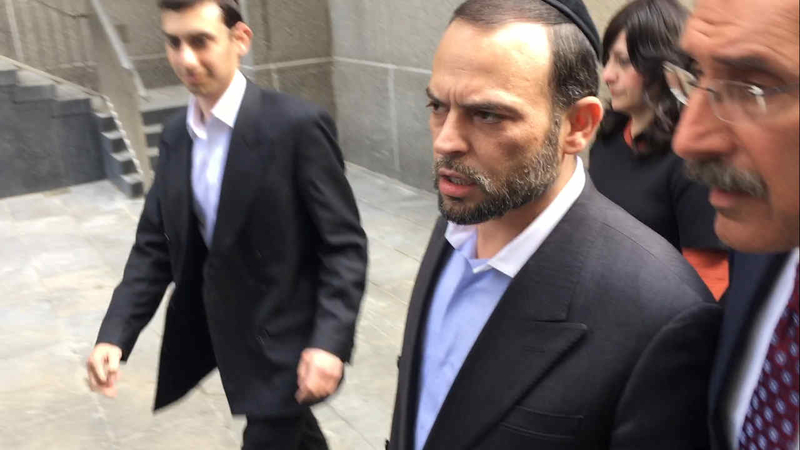 NEW YORK (WABC) -- A businessman at the center of the sweeping federal corruption probe of the NYPD accepted a plea deal Thursday.

Alex "Shaya" Lichtenstein pleaded guilty to two counts of bribing officers in the NYPD's licensing division to expedite handgun permits between 2013 and up until this summer.

He got choked up and briefly paused as he admitted giving "things of value, including money" to officers in the department's licensing division, which receives about 5,000 applications for gun licenses each year.

Lichtenstein agreed not to appeal any sentence between five and six years in prison, though he can argue that he deserves less or no time in prison at a sentencing proceeding scheduled for March 16. Under his plea deal, federal prosecutors agreed to recommend a sentence in the range of 57 to 71 months, although the judge is not bound by those parameters.

Prosecutors said they recorded the volunteer bragging about using bribes to get at least 150 licenses for people to carry guns. A federal prosecutor said at one court appearance that Lichtenstein was "no less than an arms dealer for the community."

Lichtenstein, 44, will remain free until he is sentenced, and he left the courthouse without comment. It is not clear yet whom, if anyone, he might implicate in the ongoing NYPD corruption investigation.

"As he admitted today, Alex Lichtenstein acted as a corrupt gun expediter, bribing police officers to obtain gun licenses, offering thousands of dollars per license," Manhattan U.S. Attorney Preet Bharara said. "In a recorded conversation, Lichtenstein bragged of using his NYPD connections to obtain 150 gun licenses. This type of corruption not only undermines public confidence in law enforcement, but it undermines public safety. And it cannot be tolerated."

His arrest led to numerous officers being reassigned, and one was fired for not cooperating with the investigation. Officials would not say how many suspended permits were originally brokered by Lichtenstein.

Precisely whom Lichtenstein is suspected of bribing was not detailed in the indictment, but an officer, a sergeant and the commanding officer were all transferred, and the investigation is ongoing.

Lichtenstein, who now resides in Pomona, pleaded guilty to one count of bribery and one count of offering a bribe, which carries a maximum term of 10 years in prison.

Prosecutors said Lichtenstein is a member of the Borough Park Shomrim, a volunteer Orthodox Jewish patrol society that seeks to fight crime and locate missing people.

The bribes were covered by fees of $10,000 or more paid by clients who got their applications to carry a handgun approved in two months or less. Typically, applications can take up to a year to process.