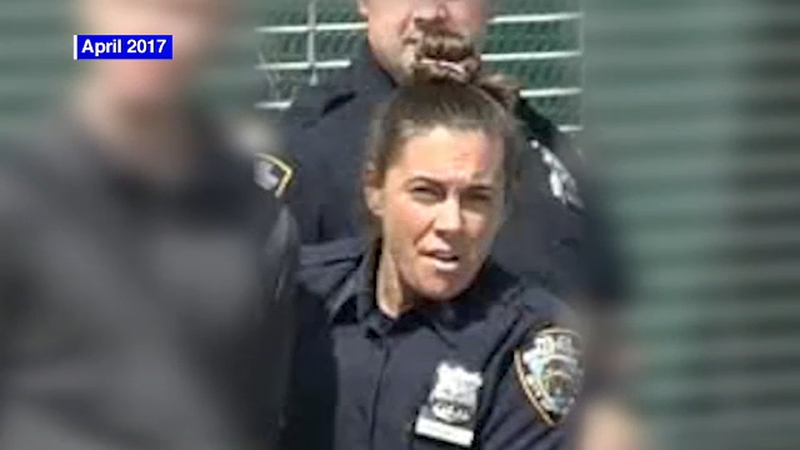 CENTRAL ISLIP, Long Island (WABC) -- An NYPD police officer indicted by a federal grand jury for allegedly plotting to kill both her estranged husband and the daughter of her boyfriend pleaded not guilty in court on Long Island Friday.

Valerie Cincinelli, 34, of Oceanside, was arraigned on two counts of murder-for-hire and one count of obstruction of justice after her indictment was unsealed at US District Court in Central Islip.

She was tearful throughout the proceeding, which lasted 10 minutes.

Her lawyer entered the plea and she spoke just once, saying, "Yes sir," when the judge asked if she understood the charges against her.

The prosecution agreed to provide audio and video evidence to the defense, so-called discovery material.

Cincinelli remains in custody without bail, and her attorney said he will make a bail application at a future date.

Prosecutors say she gave her boyfriend $7,000 to hire a hitman to kill her estranged husband and her boyfriend's teenage daughter.

The indictment identifies the targets of the plots as John Doe and Jane Doe, and according to the criminal complaint, the FBI was tipped to Cincinelli's plan by the boyfriend.

The boyfriend, according to the criminal complaint, told Cincinelli he knew someone who would to it for $7,000 that was meant to be converted for payment into gold coins.

According to court records, police went to Cincinelli's home to notify her that her estranged husband had been murdered -- but it was all part of an FBI ruse.

After the detective left, they say she immediately began talking about an alibi with her boyfriend. Later, an FBI agent posing as the hitman sent Cincinelli a text message that included a photo supposedly showing the body and an instruction to send an additional $3,000 to kill the boyfriend's daughter.

Cincinelli was assigned to the "Video Interactive Patrol Enhanced Response," or VIPER, unit, whose members monitor security cameras at city housing projects. The unit is largely made up of officers on modified duty due to other infractions, and authorities say Cincinelli had prior domestic incidents involving the boyfriend and ex-husband that led to her being assigned there.

The 12-year veteran has been suspended without pay.