4 suspects in custody, 1 on the loose after string of subway attacks that injured 5, NYPD says 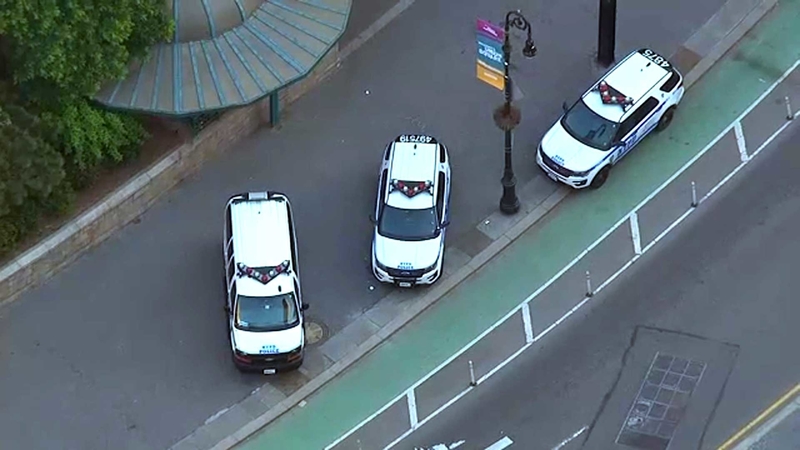 LOWER MANHATTAN (WABC) -- Four suspects are in custody after a string of slashings and stabbings on the subway that injured 5 people, the NYPD says.

The victims were punched, slashed, or stabbed in five separate incidents on subway trains or inside stations.

Police say the spree began at 4:25 a.m., when a 44-year-old man was slashed in the face on a southbound 4 train at the 14th Street Union Square station.

He was taken to Bellevue Hospital in stable condition and later spoke to Eyewitness News about the incident.
EMBED More News Videos

Four people, including an MTA employee, were attacked in the New York City subway system in a span of three hours on Wednesday morning.

The man who was slashed was also taken to Bellevue Hospital in stable condition.

Felony Assaults on the Subway:


Then, at 4:37 a.m., a 44-year-old man was slashed in the back of the head in a robbery. That victim was taken to Lenox HealthPlex in Greenwich Village.

Finally, around 5 a.m., a 48-year-old man told officers at NYPD Transit Bureau District 11 at 161st Street and River Avenue in the Bronx that he was stabbed multiple times on a northbound D train somewhere in Manhattan sometime overnight.

The 48-year-old man, who is homeless, said one attacker stabbed him once in the right eye and once in the left side of neck and his cheek.

He also was found to have sustained two slashes on his back.

He was taken to Lincoln Hospital.

Investigators worked to find surveillance video and distributed pictures of the suspects to officers patrolling the areas of the incidents.

Around 11:15 a.m. at the 79 St subway station on the Upper West Side, two officers saw four men who matched the descriptions of the suspects and arrested them.

They are suspected in all of the attacks, police say different members of the group of four may have participated in different attacks.

Late Friday, police released video of an additional suspect they are looking for in connection to the attacks.
EMBED More News Videos

Late Friday, police released video of an additional suspect they are looking for in connection to a string of violent subway attacks.

"There could be somebody else involved with this," NYPD Police Commissioner Dermot Shea said.

In a fifth incident, which police do not believe is linked to this pattern, a 47-year-old man claimed he was sleeping on a southbound 5 train when he was punched. He had a cut on his forehead and bottom lip.

He could not identify who punched him.

Police officials are looking into whether the attacks were part of a gang initiation.

"City Hall cannot continue to bury its head in the sand any longer. To keep ignoring the reality of what our customers and employees face every day across the system, especially at such a critical time in the city's recovery. Frankly ignoring that is irresponsible," Foye said.

Transit Workers Union President Tony Utano says there have been 15 instances of assaults with razors and knives since last Sunday.

Felony assaults are up 81 percent in the past 28 days compared to the same time last year.

"These were five very serious armed robbery and slashing incidents at stations on the same line," she said. "All seemingly could have been prevented by a uniformed presence on each of these platforms. The responsibility for these vicious attacks does not fall on an already strapped police department. It falls on City Hall and the individuals who are taking advantage of the mayor's negligence on the issue. If he needed a wake-up call, this is it. Enough is enough. The mayor is risking New York's recovery every time he lets these incidents go by without meaningful action."
Bill Neidhardt, a spokesperson for Mayor Bill de Blasio, issued a response.

"New York City is surging over 500 officers on top of a 2,500-strong transit force to fight subway crime," he said. "The city has pulled cops off desk duty and put them on platforms and trains. We're going to keep putting massive resources into this fight to keep our subways safe. Meanwhile, the MTA sends out statements that point fingers and talk about mayoral politics. Get with the program, help us fight back this crime."

The mayor took to Twitter to answer the criticisms lodged at him.

This is how we keep our subways safe.

The NYPD took quick action today and sent a clear message: If you commit crimes in the subways, you will pay the consequences. https://t.co/CTsE1Mgqyh

Train service was impacted as police conducted an investigation at Union Square. Southbound 4 and 5 express service has since resumed from 14th Street-Union Square to Brooklyn Bridge-City Hall.