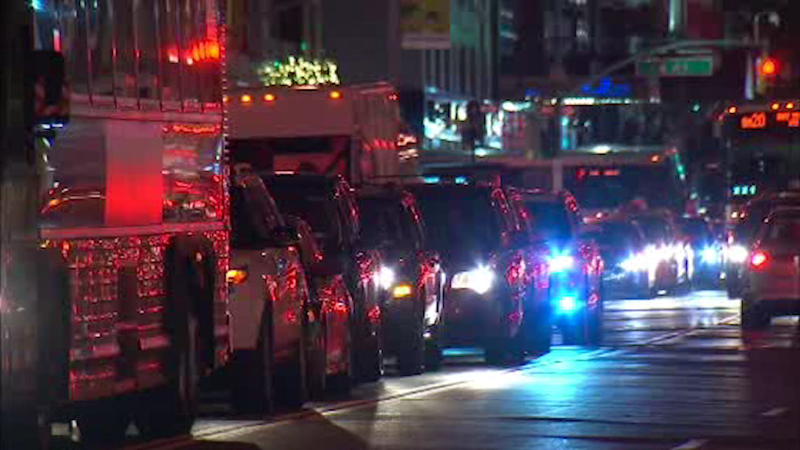 NEW YORK (WABC) -- How can the city protect President Donald Trump when he has, as his second home, an apartment on the busiest street in the biggest city in the country?

The NYPD and Secret Service are meeting Thursday to figure out how to do that, without completely disrupting Midtown Manhattan and bringing much of it to a standstill.

Donald Trump promised to end gridlock in Washington, but his historic election sure did a number in New York City.

"It's absolutely ridiculous we've been circling trying to get to the Midtown Tunnel, it's been really bad," a motorist said.

"Listen security's a good thing isn't it? But traffic isn't," a driver said.

The traffic is everywhere. At 5:45 p.m. Eyewitness News embarked in Roadcam 7 from our studio near Lincoln Center.

It took us 33 minutes in mind numbing stop and go traffic to get within a block of Trump Tower, where at 6:18 p.m. an officer told us we could go no farther, there are no trucks allowed.

"We have to strike that balance between security and making sure all New Yorkers are able to get around that busy area," Police Commissioner James O'Neill said.

"Obviously traffic in Midtown has to flow and obviously the president-elect and his entire team have to be protected," Mayor Bill de Blasio said.

Thursday, the NYPD and Secret Service will hash out the security plan. But it's a lot more complicated than just managing the traffic.

Lifrieri says the "to do" list for the Secret Service could seem limitless, everything from replacing Trump Tower windows with blast proof glass, to permanently subtracting a lane from Fifth Avenue.

In the end, he says, New Yorkers are pretty adaptable.