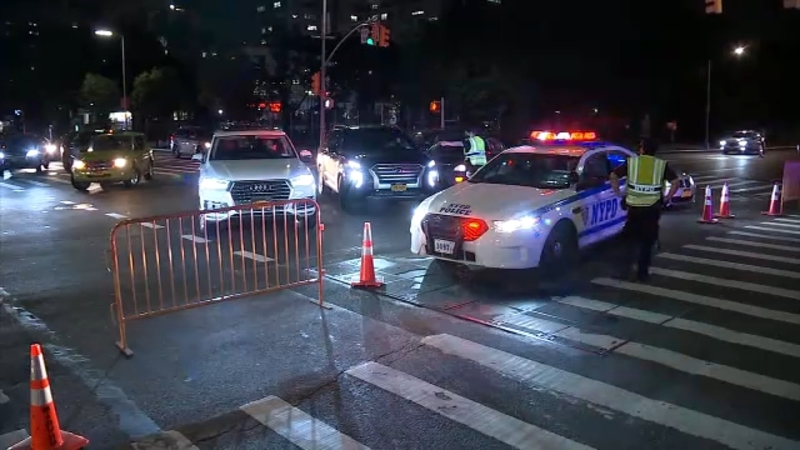 At 96th Street and Riverside Drive, the NYPD set up a checkpoint overnight for cars traveling south down Riverside and for those coming off the Henry Hudson Parkway, blocking anyone who is not an essential worker or who doesn't live in the area.

CitiBike also shut down its service overnight, along with Revel motorized scooters.

City officials say looters were using the scooters to get ahead of protests, bring supplies in for vandalism, and scout out police movements.

"We thought we had a measured plan - and then suddenly this very coordinated criminal activity in Midtown Manhattan," the mayor told CNN. "We made the adjustment. We've gone to the earlier curfew at 8:00 p.m., so it's even before it gets dark. We're going to keep it for the whole week."

Many protesters on foot ignored the 8 p.m. curfew. Video shows crowds marching through the Upper West Side. But the demonstration remained peaceful.

It was a continuation of the protests that stretched all afternoon all across Manhattan.

Earlier, thousands descended on Washington Square Park, kneeling in a peaceful demonstration after the death of George Floyd in Minneapolis.

"Unquestionably, it has been a tough few days," said Mayor de Blasio. "And this early curfew has made a big difference. Everywhere streets are much more empty, huge amount of NYPD presence. I think this is the right approach that will help us to really lead this kind of this moment out and get back to a more normal place."

Most streets into SoHo were also taped off as part of the effort to curb vandalism and looting.

Eyewitness News found at least one store - Saks Fifth Avenue - boarded up with razor wire installed along the top of the boarded up windows.

It appeared some businesses were not taking any chances and arranged for their own protection.