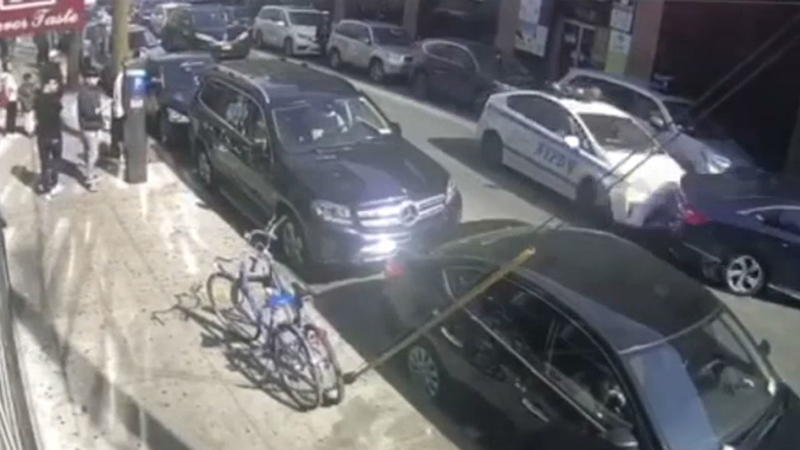 FLUSHING, Queens (WABC) -- An investigation is underway after the vehicle of an NYPD traffic supervisor was caught on camera ramming into multiple vehicles over the weekend.

The incident was reported Saturday just after 3 p.m. on a crowded street near the intersection of 37th Avenue and Main Street.

Some described the crash like a dangerous game of bumper cars.

Video of the incident shows multiple witnesses on the sidewalk at the time of the crash. They say there was no arguing, screaming or honking before or after the crash.
EMBED More News Videos

CeFaan Kim reports on the NYPD traffic car that slammed into multiple vehicles in Queens.

Surveillance video shows car come to a stop behind a dark-colored sedan. Everyone patiently waits for 45 seconds, but then the NYPD vehicle rammed into the sedan before going in reverse and hitting the minivan behind him.

Then the driver can be seen hitting the gas again and slamming into the sedan once more -- ricocheting off of it and crashing into a parked truck.

The traffic agent can then be seen getting out of his vehicle and radioing for help.

An NYPD spokesperson said the traffic supervisor appeared disoriented and was taken to a hospital for evaluation. Police sources say he was not intoxicated.

The owner of the parked truck said he doesn't believe the incident was the result of a medical episode.

The incident remains under internal review. So far no charges have been filed.