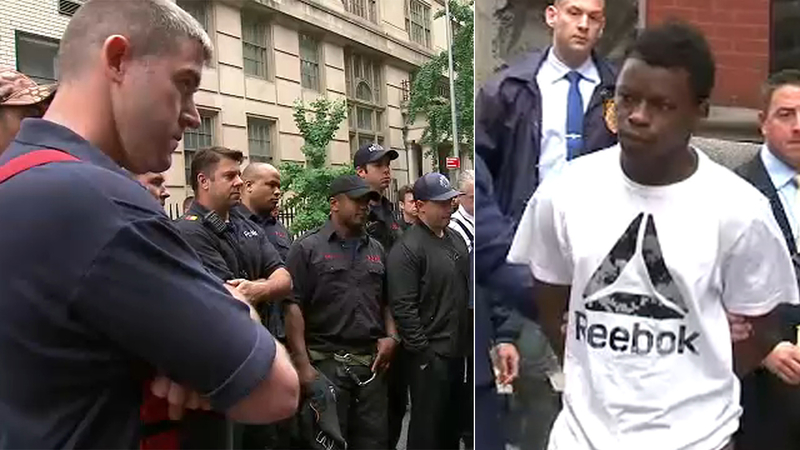 UPPER EAST SIDE, Manhattan (WABC) -- Police have arrested a teenager in the assault of an off-duty firefighter on the Upper East Side last weekend.

Damir Johnson, 17, is facing a charge of second-degree assault.

An ARREST has been made re: the May 18 assault in the @NYPD19Pct. The subject, a 17-yr-old male, is in custody. The victim, an @FDNY firefighter who acted as a good samaritan, continues to recover from serious injuries. We thank him for his actions & wish him a swift recovery. pic.twitter.com/eB8lyfDJzW

He was greeted by a line of grim faced firefighters who stared him down as he was moved from the 19th precinct on Thursday.

For his part, Damir insisted the off duty firefighter attacked his friend first, and he was merely defending his friend.

The incident happened on Saturday around 9:25 a.m. on E. 86th Street between 2nd and 3rd avenues on the Upper East Side.

Police say the victim tried to stop the group from harassing an elderly couple.
That's when Johnson allegedly punched him in the back of the head and then stomped on him while he was down.

The firefighter suffered a mild concussion to the head and had five broken teeth. He needed 25 stitches.

The NYPD says the firefighter continues to recover from his serious injuries.

"We thank him for his actions and wish him a swift recovery," police said in a tweet.

Johnson has three prior arrests -- grand larceny, robbery and attempted robbery - since January

Authorities said he was turned in by his own mother when police arrived at his apartment in Harlem to arrest him, based on a CrimeStoppers tip.

Regarding the dozens of firefighters from a nearby firehouse staring him down as he left the 19th precinct, Uniformed Firefighters Association President Gerard Fitzgerald said, "The New York Fire Department is like a family. You hurt one of us, you hurt all of us."