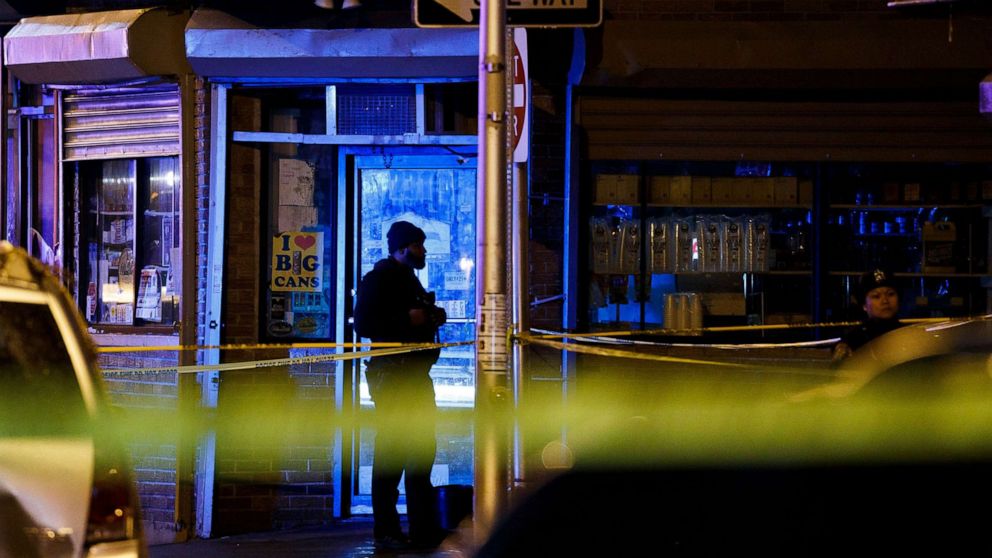 A New Jersey police officer and three people were killed after an hours-long gun battle prompted by what officials believe was a "target" attack..

The slain officer was shot at the Bay View Cemetery in Jersey City, allegedly by two suspects, who then fled to a Jewish supermarket at Wilkinson Avenue and Martin Luther King Dr. in Jersey City, police said.

The Hudson County Prosecutor's Office confirmed that the officer died after he was transported to a nearby hospital. Three civilians inside the supermarket were also killed and one other civilian was injured, officials said.

The suspects then retreated to the supermarket and allegedly continued to fire at responding officers. Two other police officers were shot, one in the shoulder and one in the body, and they have both been released from the hospital, Kelly said.

Another officer was injured by shrapnel, police said. No other citizens who were in the area at the time were shot, Kelly said.

Both suspects were found dead inside the store, police said. Preliminary investigations indicated that the shooters targeted the location they attacked, according to the city's mayor.

"Based on our initial investigation (which is ongoing) we now believe the active shooters targeted the location they attacked," Jersey City Mayor Steven Fulop tweeted Tuesday evening. "Due to an excess of caution the community may see additional police resources in the days/weeks ahead. We have no indication there are any further threats."

A stolen U-Haul vehicle has been taken from the scene and is being examined by a bomb squad because investigators believe it may contain an "incendiary device," Kelly said.

Several SWAT officers on the scene were seen barricading themselves behind cars as several gunshots went off in the neighborhood, live video showed.

The heavy gunfire continued for more than an hour. All law enforcement units "within earshot" responded to the scene, including the FBI; Port Authority; the Alcohol, Tobacco, Firearms and Explosives (ATF) bureau; and all surrounding municipalities, Kelly said.

Nearby schools were placed on lock down until 4:15 p.m., according to the New Jersey School District. All students are accounted for.

The deceased officer was identified as Detective Joseph Seals, who was part of the Jersey City Police Department's cease fire unit, Kelly said. Seals was in plain clothes when he was shot, Kelly said.

Seals was the department's "leading police officer for removing guns from the street," Kelly said, adding that he was responsible for removing "dozens and dozens" of firearms.

In addition to the drug connection, Seals may have been interested in the two suspects who ultimately shot and killed him because of a weekend homicide, according to law enforcement sources.

On Saturday, around 10 p.m., police in nearby Bayonne found a Jersey City man, identified as Michael Rumberger, in the trunk of a Lincoln Town Car. The crime had not been immediately solved.

Seals is survived by a wife and five children, Mayor Fulop told reporters. He had been with the department since 2006 and was promoted to detective in the last few years.

"Please keep the officers of the Jersey City Police Department in your thoughts and prayers as they work to resolve the situation," Grewal said. "We remain, as always, extraordinarily grateful for their service and their sacrifice."

New Jersey Gov. Phil Murphy has been briefed on the shootout, he said in a statement.

"Our thoughts and prayers are with the men and women of the Jersey City Police Department, especially with the officers shot during this standoff, and with the residents and schoolchildren currently under lockdown," Murphy said.