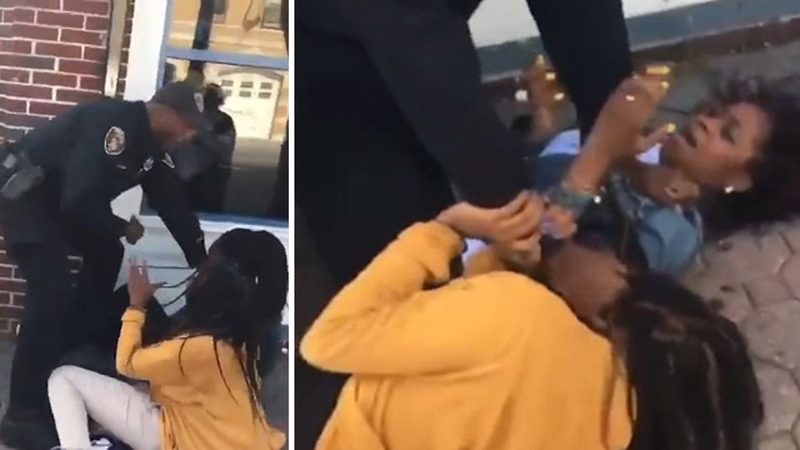 ORANGE, New Jersey (WABC) -- A police officer has been suspended following an altercation with twin sisters outside a high school in New Jersey.

The scuffle occurred across from Orange High School on Thursday.

Video surfaced of the officer throwing a student to the ground and then physically restraining the teen and her sister.

It happened as Orange High School was letting out for the afternoon.

Nyasia and Kyasia Sorrells said they were getting pizza before heading back to band practice when Officer Hanifah Davis tried to clear the corner. He was on foot patrol at the time and for some undetermined reason he got into a physical altercation with the girls.

Video shows Davis talking to Kyasia when her sister approaches, even though the officer told her to back up. Davis is seen grabbing her by the hair before both girls end up on the ground with Davis on top of them.

One of the girls is also thrown into a store window, the video shows. The school's principal tries to intervene and is placed in what appears to be a headlock.

The girls claim the same officer stopped them the night before when they were riding in an Uber vehicle with their mother. That's part of the department's investigation into the incident.

Students and administrators are upset about the alleged case of police abuse.

"He was pushing people and grabbing me and put me up against the pizza store and the glass, that's how I got the black eye and then she came to see what was wrong and he grabbed her like this and dragged her," said Kyasia.

"I was in the store but you can see through the glass, see him grab her and push her into the glass so I came out here like, what are you doing, and he pushed me. Then I got up and tried to get him off of her," said Nyasia.

In a statement released Friday, Mayor Dwayne Warren and the police department said Officer Davis has been relieved of duty pending an investigation.

He had been with the Orange police force for 3 1/2 months at the time of the incident. He was a transfer from the Union County Sheriff's office.

As a part of the investigation, police are looking into the traffic stop and an allegation that Officer Davis accused the women in the Uber vehicle of being prostitutes. He is also being investigated for pulling out his gun during another unrelated incident.

A school board staff member who tried to intervene was ticketed.

Both of the girls face charges for resisting arrest. The protesters said they want the charges to be dropped.