Officials fear arsonist on loose after 4 fires in New Jersey 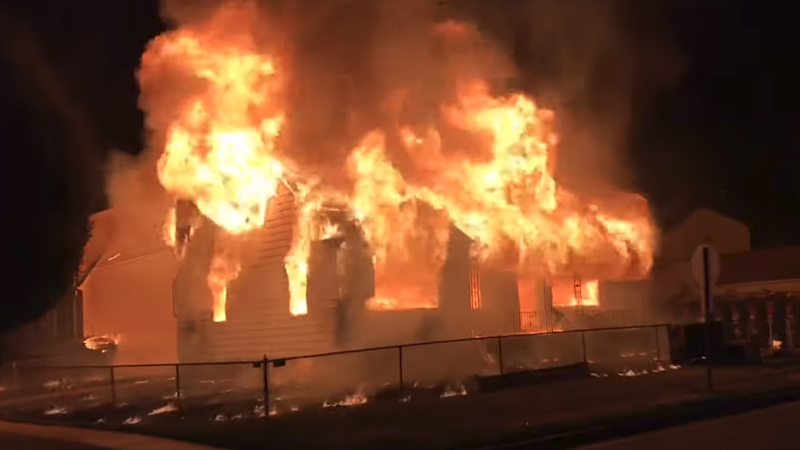 Officials fear arsonist on loose after 3 fires in Linden

LINDEN, New Jersey (WABC) -- Officials are investigating whether four fires in New Jersey were intentionally set by the same person or people.

Three fires were reported in Linden and one in Roselle between Thursday night and Friday morning.

Then a home under renovation on Seymour Avenue went up just after 10:30 p.m. Firefighters returned to the scene Friday morning to put out some hot spots. Fortunately, no one lived in the house.

In the third case, dumpsters at the Joseph E. Soehl Middle School on Henry Street were reported on fire just after 12:15 a.m. Friday. Officials said there were also a few small brush fires in the area.

John Del Giorno reports from Newscopter 7 over the scene in Linden.

Finally, a detached garage behind a house in Roselle burned down. Two vehicles were also damaged. Investigators are looking into whether this fire could be connected to the others.

"We had three fires here in Linden alone. At this time, we don't know the cause. Our investigators are trying to determine what was the cause of the fires. I'm sure they will determine that," said Derek Armstead, mayor of Linden. "We had another fire in Roselle. It proved to be a very challenging night for our firefighters and our first responders. Somehow, we will figure it all out."

So far, no arrests have been made, but the timing of the fires makes them suspicious. All are under investigation.

Armstead had harsh words for the person or people responsible for these fires.

"Beware. We will do everything humanly possible to catch you. And if we catch you, you will be prosecuted to the fullest," he said.

The mayor added that officials are taking these suspected arsons very seriously.

Anyone with information about these incidents is urged to contact Linden Police Detective Matt Jones or Tim Hubert at (908) 474-8537.