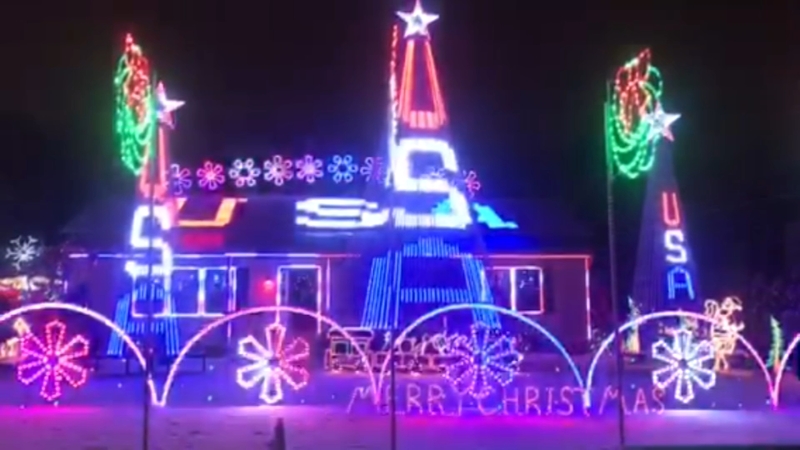 OLD BRIDGE, New Jersey (WABC) -- One holiday light display at a home in Old Bridge, New Jersey, is getting a lot of attention and not all of it is good.

Old Bridge police confirm they have received complaints on the holiday display at 18 Central Avenue.

The complaints have been about congestion and traffic in the area.

As a result, the police have set-up extra detail on the block to help manage the traffic.

Homeowners Thomas and Kristine Apruzzi have put on the light display for nearly two decades, which has grown over the years. It's made up of 70,000 bulbs.
"We have the support of the police officers in Old Bridge Township and the support of the mayor, and they've all come together to help us rectify the concerns that the neighbors have," Kristine said.

Old Bridge police confirm they have received complaints on the holiday display at 18 Central Avenue. The complaints have been about congestion and traffic in the area.

"If they want to stay in their house and be unhappy and not come out to see a beautiful display like this, pity them," Tom said.

The set up for this elaborate display began back in September and the Apruzzi family estimates they've invested nearly $100,000.

But their good intentions have also cost them in other ways. Tom says someone recently vandalized his work truck.

"Bringing 28 days of a little traffic to the neighborhood, this is what I have to deal with 12 months out of the year," Tom said.

In spite of these challenges, the Apruzzi's have no intentions of stopping.

"I can't see why anyone would complain, this is awesome," said Julio Gonzalez, a spectator.

"It's the best in the whole entire world," said Harsh Patel, a spectator. "You might want to come next year and check it out too!"

Donations from visitors of the light show go to support Homes for Our Troops (HFOT).