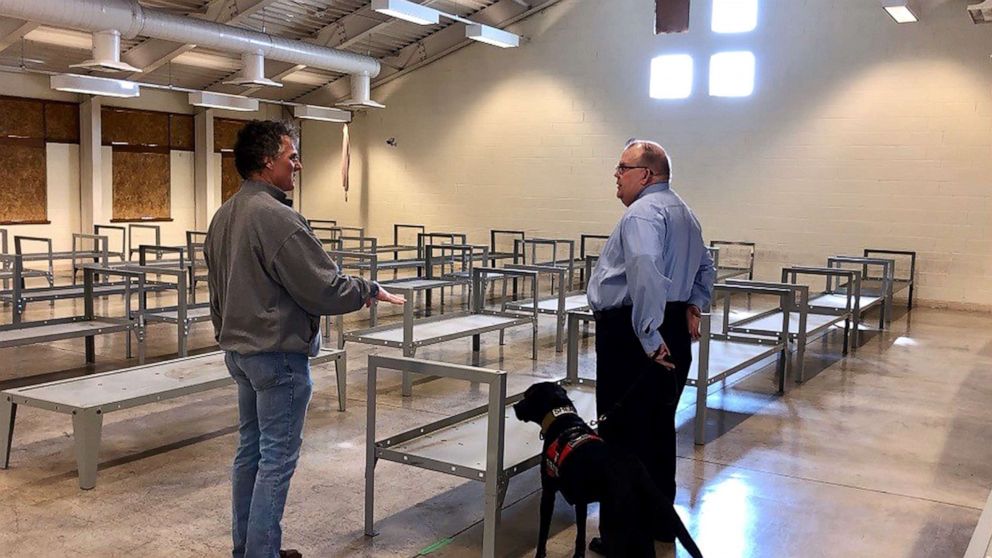 The number of detainees testing positive for coronavirus at the Cook County Jail in Chicago skyrocketed over the weekend, leaving Sheriff Tom Dart grabbling with a dilemma that runs against the very grain of a veteran lawman and former prosecutor: whether to free alleged criminals instead of keeping them locked up.

As of Tuesday afternoon, one of America's largest single-site jails had 141 inmates who have tested positive for COVID-19, up from just 38 on Friday, Dart told ABC News. Of all the inmates tested so far only 11 were negative, he said.

"This is beyond complicated," Dart said. "There was zero playbook for this stuff."

With roughly 75% of his jail's inmates arrested on suspicion of violent crimes, Dart said he's been working around the clock with Cook County officials, judges, probation officers and the State's Attorney's Office to devise a plan from scratch on how to keep dangerous people locked up and still create space in the jail without jeopardizing the community.

Since crime hasn't been put on quarantine with the bulk of the population, Dart has also had to juggle the daily intake of more inmates while thinking of ways to secure the health of those already under his watch.

"It's like I'm running this cruise ship, but we can't disembark people. It's quite the quandary because we know we have the coronavirus, but we keep embarking more people. And I've told people you don't have the option of just shutting the door and saying, 'We're not taking any people in.' That's where the juggling part of this is so incredible. I can't tell you how many configurations and different iterations I've come up with in just the last week, let alone the last month."

In the past week Dart has been forced to be more creative than he's even been. He's opened a former boot camp building on the grounds of the jail and turned it into a 500-bed hospital, where infected inmates began receiving treatment on Monday night.

"That's going to give me breathing room on the other side of the compound where the cells are at, so I can fully single-cell everybody," Dart said. "Right now it's about a little less than half of the population that are in single-man cells, which is not our norm. Our norm is double cells for the majority of people and then we have dormitories for other people."

"I keep them together for seven days. For instance, Tuesday's group will stay in a separate location for seven days and so on," Dart explained. "I keep cycling through that and by doing that I'm trying to make sure I'm not importing a sick person in. These cohorts are waiting for seven days before they go into the general population. I did that by opening up some of the empty buildings I have here."

On top of everything, 25 members of Dart's staff have also tested positive for the virus, up from six on Friday.

"The difficulty, and I knew it coming in, my employees don't live in the place. They go home at the end of their shift," Dart said. "We strongly believe that a good percentage of the positives we're getting come in from the outside, from staff. And we knew that, so it wasn't a shock to us. So I felt good that I was isolating the detainees that were coming in, but there was nothing I could do about the staff part of it. That is still a tricky component that I don't have a good answer on."

Dart said he's been working with Cook County State's Attorney Kim Foxx's office to identify non-violent inmates to release from the jail, including those over the age of 60 with underlying health conditions, pregnant inmates in the women's wing, and poor inmates unable to raise $1,000 bail or less. That's helped drive down the jail population from 5,550 last week to 4,800, he said.

"It's been tricky, but we're getting through it," said Dart. "The big question is how much longer is this going to go on because between the equipment and the testing, we really need some help in those areas and I don't know how much longer all this stuff is going to take to get to us."

What to know about the coronavirus: