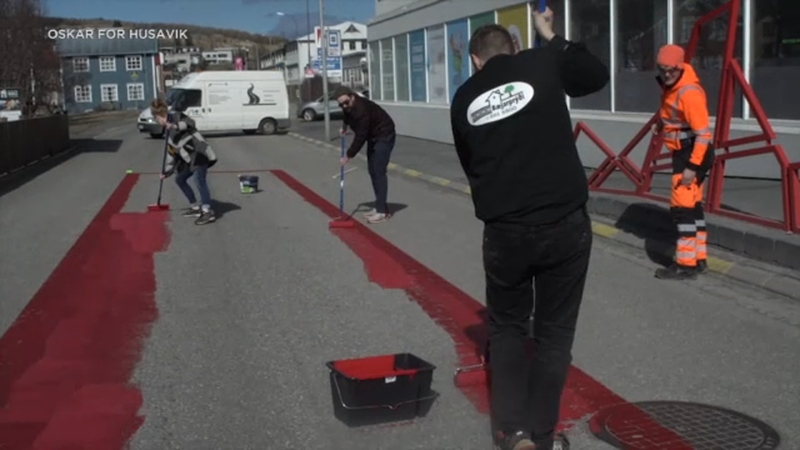 HOLLYWOOD -- Residents of Iceland have embraced an Oscar-nominated song with a strong sense of local pride. The town's main street has been painted red for citizens to create their own red carpet moments in honor of "Husavik."

The song, which is about the little Icelandic town of Husavik, is nominated for Oscar's Best Original Song. It's featured in the Will Ferrell and Rachel McAdams comedy, "Eurovision Song Contest: The Story of Fire Saga." Award-winning songwriter and record producer Savan Kotecha is a behind-the-scenes pop music superstar - and one of the Oscar-nominated songwriters of "Husavik."

"At this point in my career, I kind of want to just do something that was fun and unexpected. And, you know, Will Ferrell was attached to the movie. It's kind of hard to say no to that, you know?" said Kotecha.

Residents of Iceland have embraced the song.

WATCH | Who do people thank after winning an Oscar?
EMBED More News Videos

"Yeah and it's fun to see it played out in real life with, like, with Husavik, you know? They're so proud and so--and are so excited," said Kotecha.

In addition to literally painting the town red, the children of Husavik are committed!

"They're closing schools the day after the Oscars so families can say up late and watch it!" said Kotecha. "I'm an Indian kid from Texas who was supposed to be a doctor or a lawyer so to be nominated for an Oscar is something I couldn't have even imagined in my wildest dreams."

Mark your calendars: April 25 is Oscar Sunday. Live coverage begins Sunday morning and continues all day with special "On The Red Carpet" coverage leading up to the 93rd Academy Awards ceremony. After the last award is handed out, stay with "On The Red Carpet" for continuing coverage. Be sure to follow @OnTheRedCarpet on Facebook, Twitter, Instagram and TikTok for all your Oscar news and information.
Report a correction or typo
Related topics:
arts & entertainmentoscarsacademy awardsmovieotrc
Copyright © 2021 OnTheRedCarpet.com. All Rights Reserved.
TOP STORIES
Fauci says omicron variant will 'inevitably' arrive in US
Netherlands confirms 13 cases of omicron variant; Australia reports 2
Vaccine inequity, hesitancy made omicron more likely: Scientists
What is omicron? What to know about new COVID variant
COVID Updates: Vaccine makers preparing in case tweaks needed
Trial set to start on charges Jussie Smollett faked racist attack
Giants set to honor Michael Strahan with jersey retirement
Show More
Everything you need to know about Hanukkah
2 women killed, man critically injured in single-car crash
Is it ever too early to put up a Christmas tree?
Arbery, Rittenhouse cases spotlight self-defense and vigilantism
AccuWeather: Potential snow showers
More TOP STORIES News