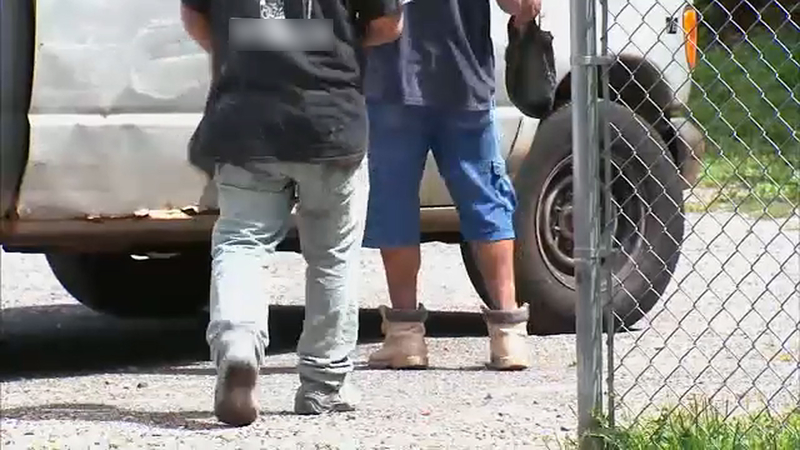 OYSTER BAY, Nassau County (WABC) -- A federal appeals court has ruled that day laborers have a constitutional right to find work by hanging out on the streets, in what is a huge blow to one small town on Long Island.

The Town of Oyster Bay in Nassau County began restricting day laborers looking for work in 2009. But now, the courts say the town's actions violated the first amendment.

Day laborers congregate each morning in a four-block stretch of Forest Avenue, where one young girl said she has trouble even getting to her school bus stop because they block the narrow path. Others say they leave trash and interfere with traffic, but a federal court ruled Tuesday that they are allowed to congregate under their first amendment rights to commercial free speech.

Bill Eliseo has owned this house on Forest Avenue in Locust Valley for more than 20 years, and he says day laborers line his street almost every morning.

"For the most part, they're hardworking people," he said. "But you don't need them in front of people's residences. That's the issue. Find a shape-up area somewhere."

Others didn't have much of an issue with them.

"They don't seem to bother us," said Christine Long, who works nearby. "They don't come near the office or anything, so I don't have a problem."

The Town of Oyster Bay passed an ordinance in 2009 making it illegal to solicit work while standing on the street, citing pedestrian and traffic safety. A district court ruled the ordinance unconstitutional in 2015, so the town appealed to the federal court.

Jackson Chin, with LatinoJustice, was the lead attorney representing the workers' rights in the most recent case.

"The Second Circuit decision is an important first amendment decision that will protect day laborers in the Town of Oyster Bay, but also in other jurisdictions contemplating ways to restrict the rights of day laborers to solicit for employment on public streets," he said. "This case has gone up and down the courts, and we've constantly been supported by the federal judges, so we feel like we're on strong ground."

Town Supervisor Joseph Saladino says the town is appealing the decision to the Supreme Court.

"This is not about anything negative to anyone or any group," he said. "We encourage everyone. We embrace everyone. But it has to be about protecting residents, making sure people are following the law, making sure our communities are safe and making sure that those who aren't paying taxes don't take jobs away from those who do."

When asked if the town could build or designate a place for the day laborers to congregate, Saladino said he would not ask taxpayers to pay for such an expenditure.
Report a correction or typo
Related topics:
politicsoyster baypoliticsimmigration
Copyright © 2022 WABC-TV. All Rights Reserved.
TOP STORIES
TX school shooting leaves at least 19 children, 2 adults dead
Uvalde school shooting: What we know about 19 kids, 2 teachers killed
Jersey City police fatally shoot man after report of shots fired
Fleet Week New York returns to the Big Apple
Texas school shooter bought 2 rifles within days of turning 18
AccuWeather: Sun and clouds with a cool breeze
Matthew McConaughey: 'We must do better' after massacre in hometown
Show More
Josh Duggar sentencing on child porn conviction expected Wednesday
'People are getting numb': Texas mom reacts to mass shoot at school
A look at some of the deadliest US school shootings
Rep. Antonio Delgado to be sworn in as NY lieutenant governor
Biden to sign policing order on anniversary of Floyd's death
More TOP STORIES News