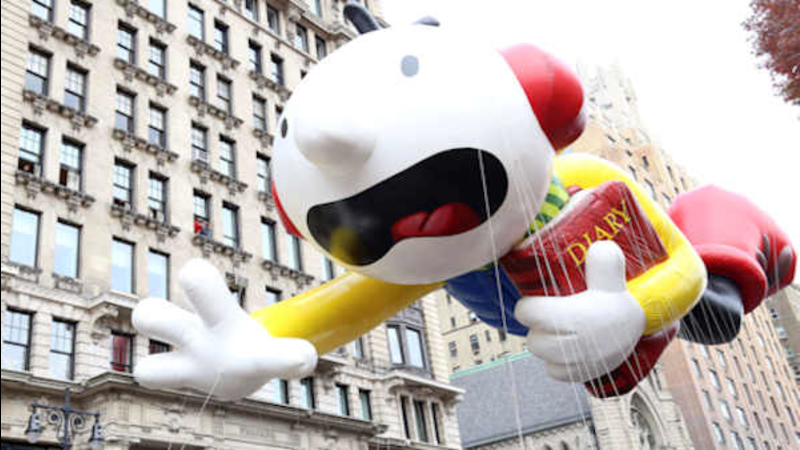 Revelers cheered and yelled, "Thank you!" to officers along the parade route, giving special attention to the New York Police Department marching band.

Spectators - sometimes standing 10 deep - held signs and balloons as they watched Santa Claus and his reindeer, Ronald McDonald and SpongeBob SquarePants pass by. Charlie Brown led the signature balloons as the parade kicked off with a ceremonial ribbon-cutting before the parade made its way down to Macy's flagship store on 34th Street.

Images from the parade:

Clowns carrying bundles of balloons rode down the parade route as marching bands from across the country entertained revelers. Costumed characters and dozens of celebrities, including singers Tony Bennett and Sarah McLachlan and Olympic gold medalist Laurie Hernandez, were among the attendees.

Annie Quinn traveled more than three hours from Albany to attend the parade with her cousin and two sisters - all three dressed in turkey costumes - scoring prime front-row seats along the route.

"We sat here for hours, but it was worth it," she said. "This was the best parade I've seen in a while."

But amid the fun, high-fives and cheers, there was an air of uncertainty about the possibility of an extremist attack after a recent posting in an English-language Islamic State group magazine that called the parade "an excellent target." Nevertheless, the parade went off without a hitch Thursday.
EMBED More News Videos

More than 80 sanitation trucks filled with sand were parked at intersections and other places, acting as barriers against any kind of attack. The NYPD said the sanitation trucks, which they have used before, would play a bigger role at this year's parade in the wake of the cargo truck attack in Nice, France, that killed more than 80 people.

In addition to more than 3,000 uniformed and plainclothes officers, bomb-sniffing dogs and officers with assault weapons and portable radiation detectors walked among the crowds.

At least one spectator said the intensive security made her feel secure.