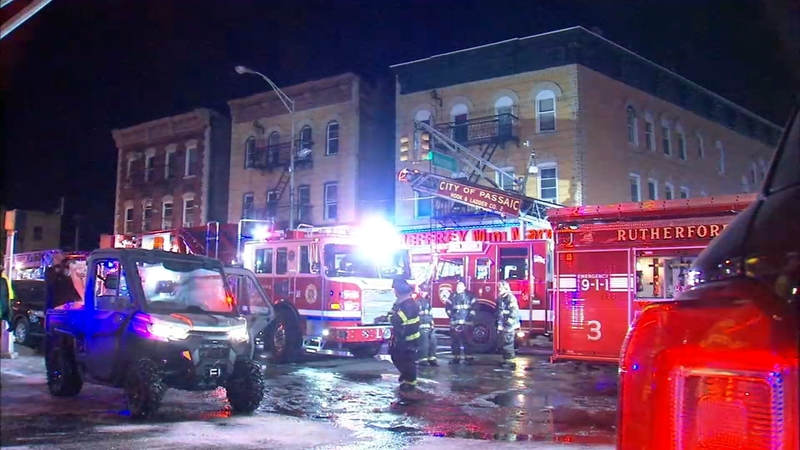 The flames broke out around 3:30 p.m. at 89 Main Street, near Harrison Street, in Passaic.

As soon as firefighters arrived, they were met with heavy fire on the first floor of the building.

The blaze blew out the windows of the rear apartment.

Firefighters worked to vent the blaze and get water on the flames.


At least five people were hospitalized, including a 65-year-old woman, a woman in her 40s, a 19-year-old man and two children, the youngest being 7 years old. Their conditions are unknown.

"Every fire escape. One in the back. One in the rear. Seven people on this fire escape. Six people on the rear fire escape," Fire chief Patrick Trentacost. "So both companies as well as engine companies went right into rescue mode. Six rescues were made immediately. As they got deeper into the building, they were able to help evacuate several people that were on the third floor."

Family pets were rescued too.

There were fears that the fire could spread to two similar structures on either side, and firefighters also attempted to contain the fire to the building.

"Fire just got so far ahead of us. You know life is priority. We made our rescues. The fire was able to get a little ahead of us. Once we got into the fire it was already up into the cockloft into the third floor," Trentacost said.

He says weather was a factor in the race to put out the fire.

"Certainly the weather is a factor. Ice. I mean we've been pretty beat up for these past few weeks. Tremendous effort for my personnel," Trentacost said.

It took 65 firefighters about 90 minutes to get the fire under control.

The blaze impacted seven apartments at Harrison and Main Avenue and businesses on the ground floor. Both buildings next door were also damaged.

"One of the buildings appears to be completely lost and structurally compromised. Two of the other buildings will be assessed overnight and by the grace of god we have not had any confirmed loss of life," Mayor Hector Lora said.

The Red Cross says they are assisting 34 people in seven families who were displaced by the fire and are offering them temporary housing, food, clothing and other immediate needs.

The cause of the fire is still under investigation.