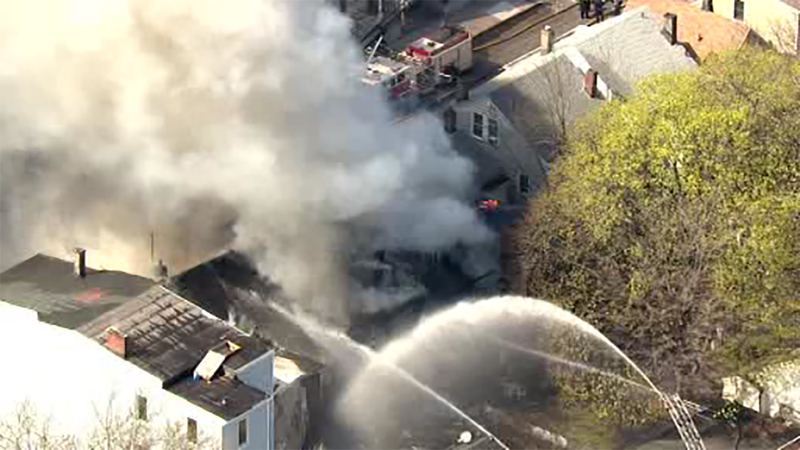 PATERSON, New Jersey (WABC) -- Firefighters are battling an intense blaze that tore through at least four buildings in Paterson Friday.

The flames broke out in an abandoned house on Rose Street that officials say has had issues with squatters in the past.

The fire spread to and consumed three other occupied buildings, but luckily, all residents were able to escape.

Councilman Luis Velez said no injuries were reported, but at least 12 families have been displaced. Several firefighters were treated for smoke inhalation.

"The squatters and the homeless get into it, and we don't know when, but they get into it," another resident said. "So the fire started in that house and it spread to two more houses on either side."

And residents say this is not the first time there was a fire at the same building, and a previous blaze was extinguished by the fire department back in December before it was able to spread.

"In December, there was a small fire up on the third floor of the same house," another resident said. "They got to it in time, and nothing happened to my mother's house. But now, this again, and it's four homes now. And it's sad."

Tenants were in tears watching all of their possessions go up in flames, even after they say they've tried for years to have something done about the nuisance house.

"We had trouble," the young mother who fled her home said. "We had the same drug dealers, the same kids that come and party in the abandoned house. We called everybody we can to get the house boarded up, tried to get it secured, and nothing's been working. We've been dealing with this for over a year."

Council members said there are several other nuisance homes in the area that could be potential fire hazards, and they hope to be able to make changes to prevent similar instances in the future. But that was little consolation for those who lost everything in this case.