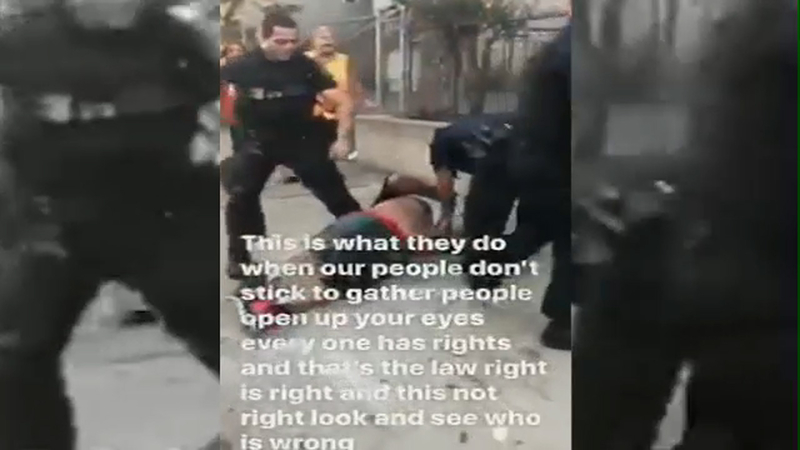 PATERSON, New Jersey (WABC) -- Prosecutors in New Jersey have launched an investigation into an arrest of a man who is deaf after video showing the man being maced and punched went viral.

Now, his family and community activists in Paterson are questioning the amount of force used to arrest him.

The video shows 42-year-old Rasseon Adams on the ground being maced by a Paterson police officer, which his attorney argues is unnecessary force.

"What I saw was very disturbing," attorney Aymen Aboushi said. "I saw unprofessional conduct from an officer that was unprepared to deal with someone who has an obvious handicap."

And the rough interaction has already been bumped up the chain.

"This matter has been sent to the Passaic County Prosecutor's Office for review," Paterson Police Director Jerry Speziale said. "The officers are on full duty."

It happened Friday afternoon, after police stopped a man along Godwin Street suspected of illegal drug activity. They say Adams forced himself into the situation, and at first, officers stood back as Adams addressed them. But then, they say Adams flicked a cigarette at the officers, who go in to arrest him.

After several minutes of instruction from officers and bystanders to put his hands behind his back, one officer appears to spray mace and hit Adams. The video shows the outraged crowd screaming at the officers.

"We want to support our cops, but we want our cops to be sensitive to our communities," activist Ernest Rucker said. "They're not sensitive to the community."

He's been booked into Passaic County Jail at least 14 times, according to recent records. He also has an arrest record in Essex County, showing three assault cases, one of them with the use of a deadly weapon. with heightened concerns of the community, though, Paterson Mayor Andre Sayegh says he welcomes a closer look into the matter.

"There were concerns that there was a video, that it went viral, there was an arrest being made, and police had to use force," he said.