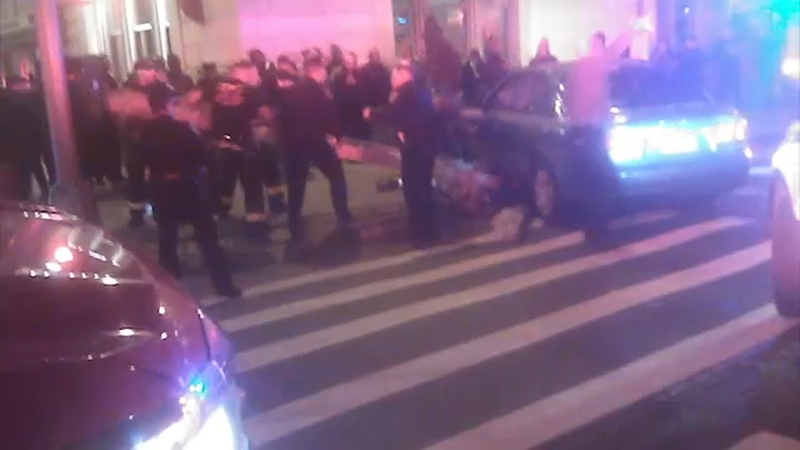 JAMAICA, Queens (WABC) -- The search is on for the driver of a stolen car who fatally struck a woman in Queens and fled without trying to help her.

It happened Tuesday night right outside Jamaica Station, where there is pedestrian traffic around the clock.

NYPD said officers attempted to stop the stolen vehicle, but the suspect declined to pull over and police went after him.

At some point, the suspect bailed out of Hyundai Sonata, but the vehicle was not fully stopped and kept rolling.

The driverless vehicle struck the victim in the crosswalk on Archer at Sutphin Boulevard around 9:15 p.m.

Cell phone video captured the moments right after it happened, as first responders and bystanders ran to help.

"I saw a car on top of a lady's head," one eyewitness said. "Police officers came, and some citizens, to help pick up the car so that she could be removed."

A responding NYPD sergeant suffered a minor injury to his shoulder while lifting the front of the vehicle off the woman.

The victim was rushed to the hospital, but she did not survive.

Police initially detained a 38-year-old neighborhood man but later determined he was not involved in the crash.

Now, while one family tries to cope with a devastating loss, investigators are checking area surveillance cameras as they work to track down the driver.