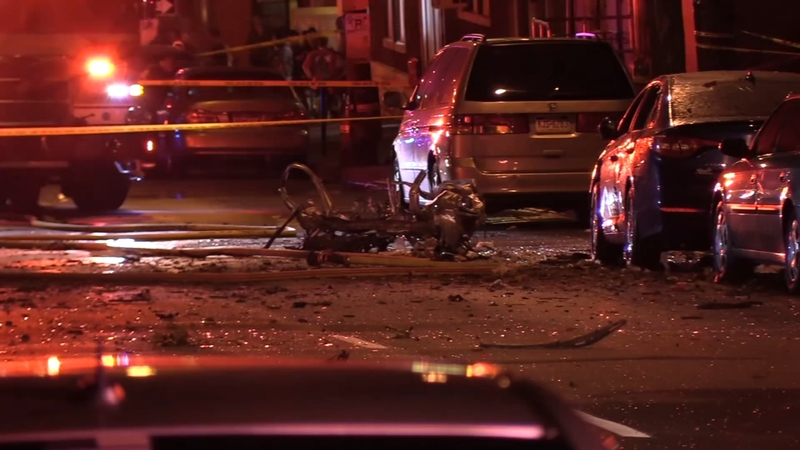 ALLENTOWN, Pennsylvania -- Autopsies were planned Monday on the bodies of three people found dead after a car explosion in Allentown in what authorities called a "criminal incident" being probed by federal, state and local authorities.

Three males were found dead after the 9:30 p.m. Saturday blast at 7th and Turner streets, said Lehigh County Coroner Scott Grim, who added that he would probably be able to release the names after their identities are confirmed and their families notified.

The federal Bureau of Alcohol, Tobacco, Firearms and Explosives is leading the investigation along with the FBI, state police, and city and county authorities. Officials said the blast was believed to have been an isolated incident with no ongoing threat to the public.

"We know there's been a criminal incident," District Attorney James Martin told reporters at a news conference Sunday. "We have a high degree of confidence that the perpetrator was probably killed in the incident."

"People were running, people were scared that's all I can tell you; just a frightening moment," said Hunter.
The blast threw debris hundreds of yards and shattered windows.

"I was serving at Queen City BBQ up the street and we heard an explosion go off and we thought maybe someone set fireworks off," said Lae Wright of Allentown. "We came out and looked and past the 7-11 we saw a billow of smoke."

Authorities released no information about the possible cause of the blast, including whether it was a bomb, but Martin said "loads of us in law enforcement" are confident "this was A. an isolated incident and B. there's no continuing threat."

Authorities are seeking the public's help and asked anyone with information to call the ATF.

Authorities cordoned off a large area and set up mobile command units as they continue to investigate, and through much of Sunday multiple blocks were closed to traffic and pedestrians. Sources tell Action News that the area may remain closed off until Tuesday as investigators scour every inch of the blast area.

"We are in the very early stages of this investigation," said ATF agent Don Robinson. "It's a large scene. We have a lot of folks involved in the scene work as well as interviews and follow up."

Residents were asked to avoid the area, and people who live nearby were asked to shelter in place. A shelter was set up at an elementary school. Officials asked anyone who witnessed the blast or had information about it to contact investigators.