What's a 'cured ballot' in the 2020 presidential election?

AP
WASHINGTON -- Across the country, any uncounted ballots cast by Election Day are being verified and tabulated as election officials work toward reporting results of the 2020 presidential election.

In some cases, problems such as a missing signature can occur, and voters are provided an opportunity to "cure," or fix, ballots so they can still be counted. This is a normal process in many states; while actual voting is over, the work of finalizing results will continue for days and, in some cases, weeks.

Here, Christina A. Cassidy, a reporter for The Associated Press who covers voting and election security, offers some insight into the post-election process for fixing ballots:

UNDER WHAT CIRCUMSTANCES CAN A BALLOT BE CURED?

If voters casting ballots in person run into problems at a polling place, they can simply ask the nearest poll worker for help. That's not the case for voters using a mail ballot, so several states have created a process for these voters to fix certain errors such as a missing or mismatched voter signature.

Eighteen states require voters to be notified if their ballots are missing a signature or there is some discrepancy between the signature on the ballot and the one on file at the election office, according to the National Conference of State Legislatures, which tracks state laws. These states all provide time for voters to fix these ballots, ranging from two to 21 days depending on the state.

In states that lack such a process, ballots with these problems are generally not counted. But a few states do not use signature verification to validate a mail ballot, including Pennsylvania. For ballots missing a signature, Pennsylvania lacks a formal cure process, though some counties have allowed voters to fix them - a source of litigation in the state.

HOW ARE BALLOTS CURED?

Rules vary on how voters can fix their ballots. In most cases, voters must sign and return an affidavit confirming the ballot is theirs. There may be additional requirements. For instance, Georgia requires identification along with the affidavit. In a few states, if the problem is identified before Election Day, the voter is sent a replacement ballot.

PATHS TO VICTORY: How Trump or Joe Biden could win the presidency
EMBED More News Videos

ARE THESE VOTES LEGAL?

Election workers review these ballots and decide which ones to count, which ones qualify for the curing process (if allowed) and which ballots are rejected. Partisan poll watchers can report concerns to party officials, who can raise objections and file lawsuits.
Report a correction or typo
Related topics:
politicselection resultsvotingvote 2020joe biden2020 presidential electionpresident donald trump
Copyright © 2020 by The Associated Press. All Rights Reserved.
RELATED 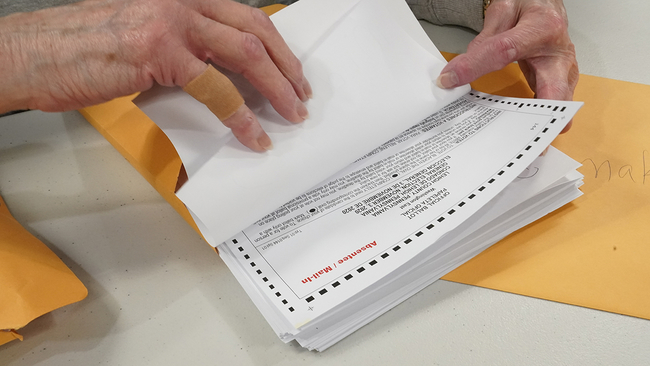 Recount rules: What happens if race is too close in key states
VOTE 2020