The incident happened shortly before 7 p.m. at a park on Hollywood Avenue in Fairfield.

Police say a 37-year-old Fairfield woman was pushing her 4-year-old son in a stroller when a coyote lunged at her.

"When she turned around, basically the coyote lunged at her, bit her in the leg," said Fairfield Police Chief Anthony Manna. "At that time, the stroller turned over. The coyote went after the child and bit him in his leg. As other people were in the park they started to run to assist her. The coyote backed off. The woman was able to right the stroller and tried to flee, again the coyote lunged. He did not get her that time and ran into the woods." 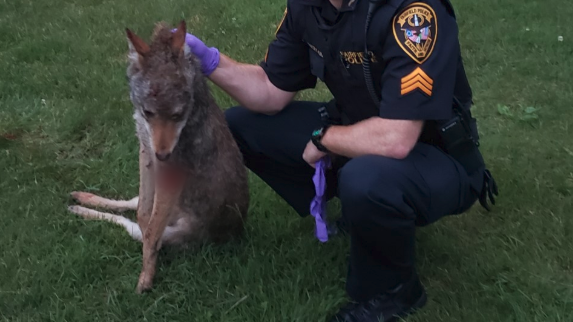 Both victims were transported to an area hospital for treatment and an evaluation.

The New Jersey Conservation Department, the Department of Environmental Protection, and Associated Humane Society were all contacted for assistance and responded.

As a search began in Peace Woods near Fairfield's sports complex, police say the coyote was spotted in a backyard chasing after a cat and began to aggressively approach Sergeant Frank Tracey.

In order to protect himself, Tracey fired several shots and killed the coyote, according to police.

"All of a sudden, the coyote turned around and started coming right at me, unfortunately I had to use force to put the animal down," said Tracey.

The Associated Humane Society will test the animal for rabies and the family is getting a series of shots to be safe.

The township of Fairfield has installed a temporary barricade around the sports complex.

Fish and wildlife experts are also keeping close eyes on the woods for more coyotes nearby.

Several residents told police that a resident's Doberman Pinscher was attacked Wednesday night by a coyote, but it is unclear whether it was the same animal.