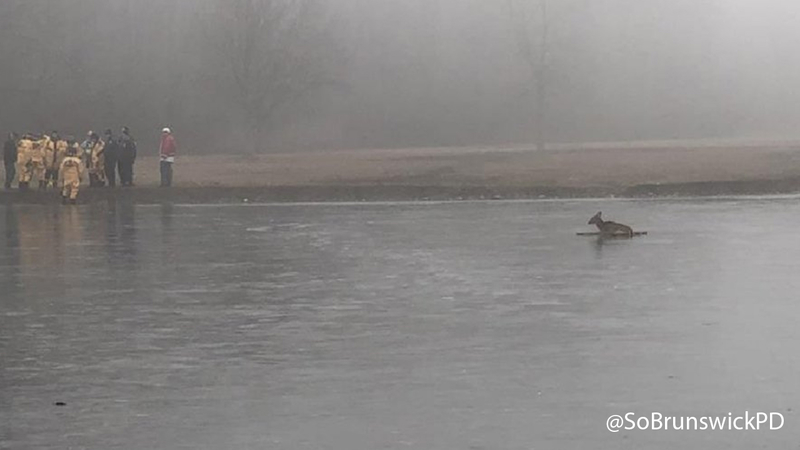 SOUTH BRUNSWICK, New Jersey (WABC) -- A delicate rescue played out in slow motion on Thursday as two fire fighters inched along an icy pond to rescue a stranded and terrified deer.

Matt Collins is the rescuer on the right in the video. The Plainsboro Fire Department member and a partner wondered if the inch-thick ice would hold them.

"The ice wasn't that thick. You heard it cracking and we were communicating back and forth to stay far enough apart so we wouldn't crack the ice and cause more of an issue trying to get the deer off the ice," he said.

The rescue happened near an office park in South Brunswick where someone noticed the deer in distress.

They reported getting many calls from concerned drivers along Route 1.

In nearby Plainsboro, they have technical training in ice rescue. And put it to work.

Plainsboro and Kingston firefighters rescued a deer trapped on an icy pond this morning in front of @DowJones. Several callers traveling on Route 1 reported the trapped deer. pic.twitter.com/MHOlqyonTY

"It is a risk but we're just animal lovers and we don't want to put that deer in unfortunate danger," Chief Scott Kivet said.

"We approached from two different angles and I got out there first and I had the animal control snare with me and I was able to snare the deer around the neck and that's when we were able to start dragging the deer off the ice," Collins said.

In the end it worked. No one hurt. Not even the deer. They dried her off and warmed her up and handed her off to animal control.

South Brunswick Township Animal Control Officers planned to check over the deer and then release it.