Rescuers on Long Island rushing to save endangered sea turtles

WABC
By Stacey Sager
SOUTHOLD, Long Island (WABC) -- Volunteers on Long Island are rushing to save critically endangered sea turtles who have washed up on the sands of the North Fork.

The East Coast is home to several turtle species, but many have fallen ill recently due to changing climate conditions.

Eyewitness News was given an exclusive look at what's being done to rescue these at-risk reptiles.

Cold days like these are beach days for Kristina Hansen and her fellow rescue workers at the Riverhead Foundation.

In this case it was Kenny's Beach on the North Fork in Southold, where Good Samaritans have done all they can to save a 50 pound Loggerhead sea turtle originally floating helplessly in the Long Island Sound.

"We saw him on his back and so we flipped him over, and carried him up, and he's alive," said one of the Good Samaritans, Joann DeLucia.

He was given a number 34 because that's how many sea turtles on Long Island have now been found, stranded, and "cold stunned" this season.

It's a condition in which the prolonged summers and sudden, extreme winters don't give these precious creatures the natural instinct to migrate south. 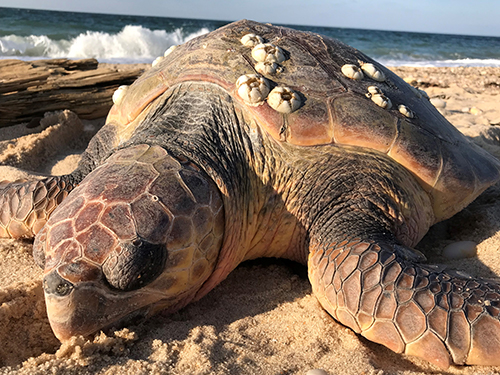 "It is so warm for so long,that they think they have more time and that drastic change slows them down, and they're not able to swim out," said Maxine Montello, Director of Riverhead Foundation Animal Rescue.

Since November on that particular beach, this is the third sea turtle they have rescued. The problem is, the others haven't made it.

"We're getting turtles with internal temperatures of negative 1.5 Celsius, so it's really hard temperatures for those animals to survive," said Montello. 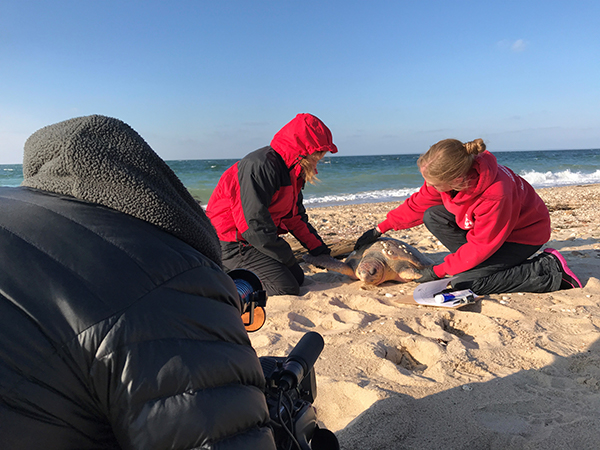 But eight of the Long Island stranded turtles have made it as of Wednesday. Volunteers say they are growing, thriving, and will hopefully be released soon, thanks to 'citizen scientists' who call the Foundation's hotline and realize it's best not to move the turtles inside, because they must warm up slowly.

"We did get a response when we inserted a thermometer so that's a good sign," said Kristina Hansen, the Riverhead Foundation's Animal Care Supervisor. "Right now, the internal temperature is 5.6 degrees Celsius."

It is encouraging news for number 34. This species is among just seven in the world alive since the dinosaur age and hopefully for years to come.

If anyone would like to be a 'citizen scientist', there are some important things to know.

Turtles should be carefully moved out of the water and onto the sand, but not indoors, as they need their temperature increased very slowly. So move them onto sand carefully.

And for more information on citizen training, visit the Riverhead Foundation web site.