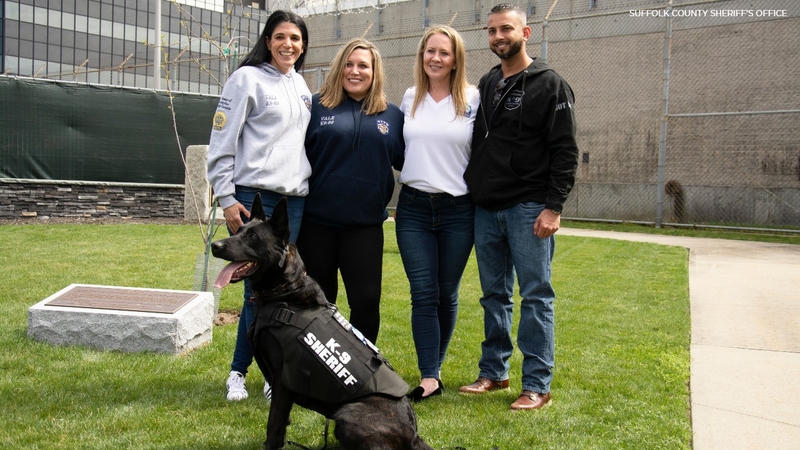 The official naming ceremony was held for 2-year-old Dutch shepherd Reis on Saturday.

Officials say he is a high-drive, strong-willed dog who exhibits a uniquely high level of courage.

His handler named him in honor of Sheriff's Correction Officer Andrew Reister who was killed while working an off-duty job in 2008.

Reister's family was there for the ceremony and to watch Reis show some of his talents.

"I had the pleasure of working alongside Andrew, both in the facility and on the COBA Board. He was not only a coworker but a friend who would do anything to help others. I thank Deputy Sheriff Korte for choosing to honor him this way," said Suffolk County Correction Officer Association President Lou Viscusi.

Later in the day, Reis received a ballistic vest that was donated in memory of another fallen officer, NYPD Transit Det. George Caccavale, who was shot and killed while working an off-duty job in 1976.

His daughter Carla and her children were at the ceremony.

The vest was donated in in part by a foundation established in honor of late NYPD Det. Brian Simonsen, who was shot and killed in 2019 in the line of duty.

"We started this foundation to ensure that my husband, Brian Simonsen, would never be forgotten," Leanne Simonsen said. "When Brian was killed my world went dark. Through this foundation, the people we have met, and the work we have done, the light has started to return with all the good we have done in Brian's name."