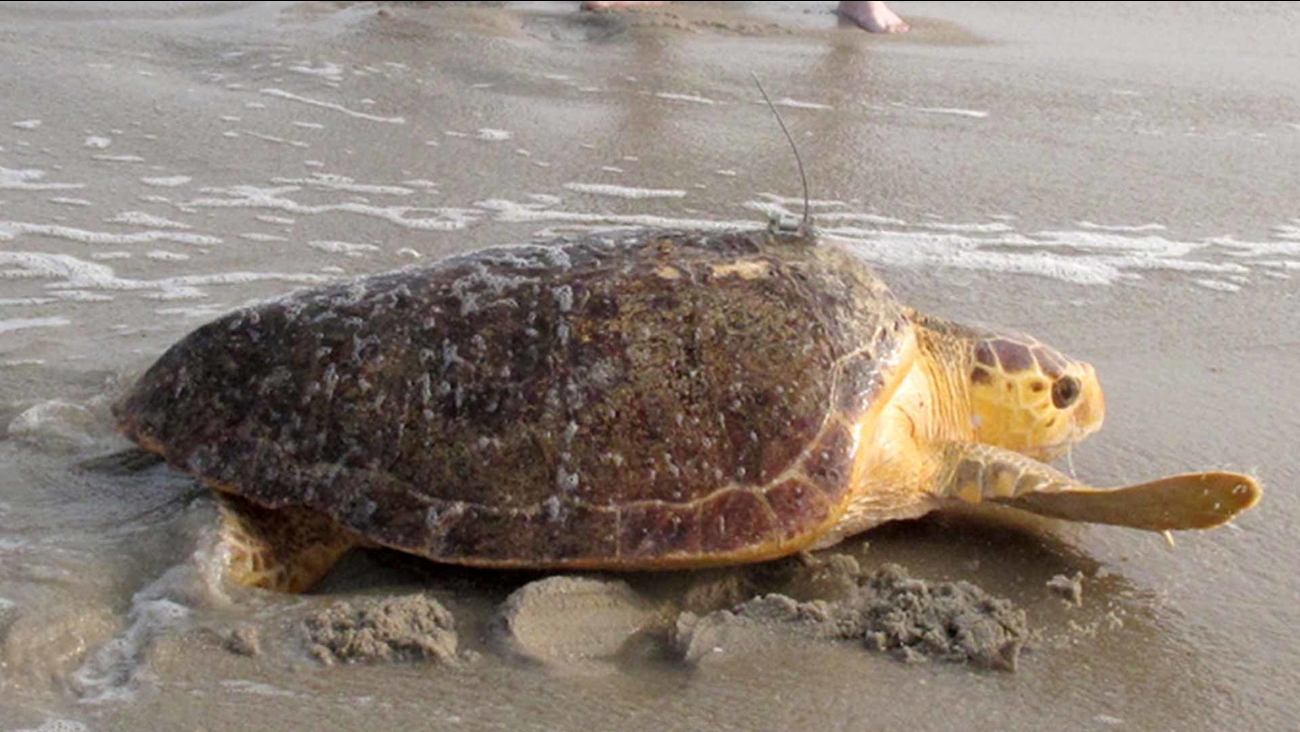 POINT PLEASANT BEACH, New Jersey -- The last time she felt the ocean waves swirling around her, Tabitha was near death.

She was tossed about in the surf in Cape May, weakened by pneumonia, severe anemia, and an intestinal blockage. She also was laden with parasites and covered with 15 pounds (7 kilograms) of barnacles, some of which had broken through to her bones.

That was on June 27, 2019, when the loggerhead turtle did not appear likely to survive the week.

But on Tuesday, more than a year later, Tabitha crawled from her wooden transport crate onto the sand in Point Pleasant Beach, roused by a wave that surged over her and prompted something ancient inside to propel her toward the sea for the second time in her life.

The 168-pound (76-kilogram) turtle was the 50th to be released back into the ocean by Sea Turtle Recovery, a nonprofit group operating out of the Turtle Back Zoo in northern New Jersey. Tabitha was one of three turtles to make the 61-mile (98-kilometer) trip from the rescue center in West Orange to the seashore resort of Point Pleasant Beach, home to an aquarium and one of the state's most popular boardwalks.

"This is what we work for," said Brandi Biehl, co-director of the center. "When they first come in, you don't even know if they're going to survive. And then you see them slowly pass small milestones and then they get better and they surprise you."

"This is the moment they wait for," she added. "It gives them back their home and their life, and that's what your goal is. It's just a magical moment."

Have you seen this viral video of the small yellow turtle swimming around?

First into the surf was Silver Belle, one of the critically endangered population of Kemp's ridley turtles, described by the National Oceanic and Atmospheric Administration as the world's smallest marine turtles species. The Ocean Conservancy estimates there are no more than 1,000 nesting females left in the world.

Carried to the water's edge, she sat still for a moment to adjust to her new surroundings and feel the incoming waves washing around her. Then, flippers straining, the 5-pound (2.2-kilogram) turtle propelled herself across the sand into the roiling surf, disappearing into the ocean.

Silver Belle stranded Nov. 21, 2019, in Beach Haven on New Jersey's Long Beach Island. She had fungal pneumonia and was severely cold-stunned because she hadn't headed south before water temperatures became too cold.

Next up was Melbourne, a green sea turtle who had stranded a week earlier in Surf City, also part of Long Beach Island. He was lethargic and found floating in the water, too weak to swim because of cold-stunning and a lung infection.

Tabitha went last, and sat motionless in her transport crate, even after the gate was lowered so she could see the ocean nearby.

But then a larger-than-usual wave washed far up the beach, into her crate and around her, rousing Tabitha. She crawled out of the box, onto the sand and into the surf.

The center had attached a radio tracking unit to her shell, which could allow it to monitor her movements for as long as 30 days. During that time, Biehl said, Tabitha should hopefully make it to Florida or even further south.