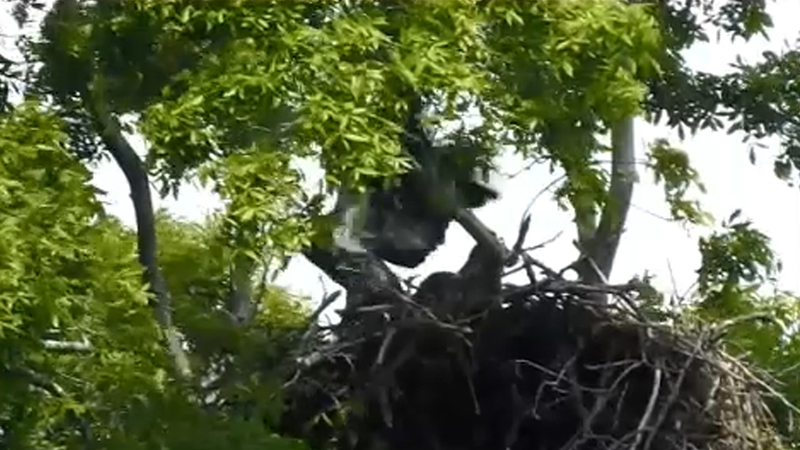 CENTERPORT, Long Island (WABC) -- Ahead of the United States' 242ndbirthday, PSEG Long Island announced it is helping protect a family that represents the symbol of American freedom.

PSEG worked with a group of bird enthusiasts and local officials to make the Centerport area safer for a family of bald eagles nesting there.

Two adult eagles hatched a pair of eaglets in April, captivating a growing number of birdwatchers who formed an active Facebook group to share photos and news.

When the young birds began to fly, the group sought the help of Suffolk County Legislator William Spencer to get protective equipment installed on nearby power poles to keep the eagles from injuring themselves.

"Centerport is already a picturesque place, and the presence of these birds only adds to its beauty," Spencer said. "I was happy to play a role in the community effort to protect the eaglets that thousands of residents have come to treasure."

PSEG Long Island responded, and within two days, a crew was installing protective equipment on two poles where the birdwatchers had seen one of the eaglets perching.

"PSEG Long Island prides itself on being a good steward of the environment," electric division manager Patrick Hession. "We were excited to hear that these majestic birds were raising their young here on Long Island, and we are proud to help ensure the next generation of our national bird thrives by installing protective equipment."

PSEG also released video (Courtesy Bruce Adams) of the young birds testing their wings. They won't get their distinctive white feathers on their heads until they are a few years old.
EMBED More News Videos

"These fledgling eaglets are just learning to fly, and we look forward to seeing them for another two months or so before they set out on their own," said Bruce Adams, chairman of the Committee to Protect Centerport's Bald Eagles. "Thank you to PSEG Long Island and Legislator Spencer for helping make their environment safer as they prepare for adulthood."
Report a correction or typo
Related topics:
pets & animalscenterportsuffolk countybirds
Copyright © 2021 WABC-TV. All Rights Reserved.
More Videos
From CNN Newsource affiliates
TOP STORIES