More dead fish wash up on shore in Riverhead

For the second time in weeks, a large number of dead fish have washed up to the shoreline in Riverhead.

"Just look, the smell, oh my God, it's terrible," a resident said.

And that's putting it mildly.

It's just the latest massive fish die off around Riverhead.

Just two weeks ago, thousands of the same bunker fish washed up around Flanders Bay.

And a few weeks before that there were more than 100 diamondback terrapins found dead around the same area.

And now there's this die off along the Peconic River.

"I wouldn't even consider putting my boat in right now. I'm still sitting on a trailer and we're in the middle of June," said Mario DePinto, a Sound Beach resident.

"We thought we could do some kayaking and get in the water and it's just not inviting," said Sue Ambrosino, a visitor.

There are two main theories here.
One is that blue fish are chasing the bunker into water with little oxygen so the bunker suffocate and die.
Environmentalists say the reason though that the water has insufficient oxygen is because of pollution.

"We're causing this fish kill whether we like it or not. The fish are dying because of septic input, they're dying because of nitrogen pollution in our waters, and we have to do our best to clean it up," said Kara Jackson, of The Nature Conservancy.

"We're going to stage it over here, pick it up with a front end loader and put into a roll off that's is lined and bring it to a disposal location in the town and bury it," said Sean Walter, the Riverhead Town Supervisor. 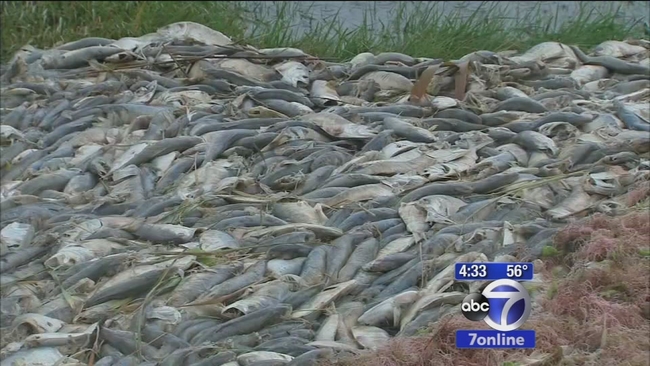