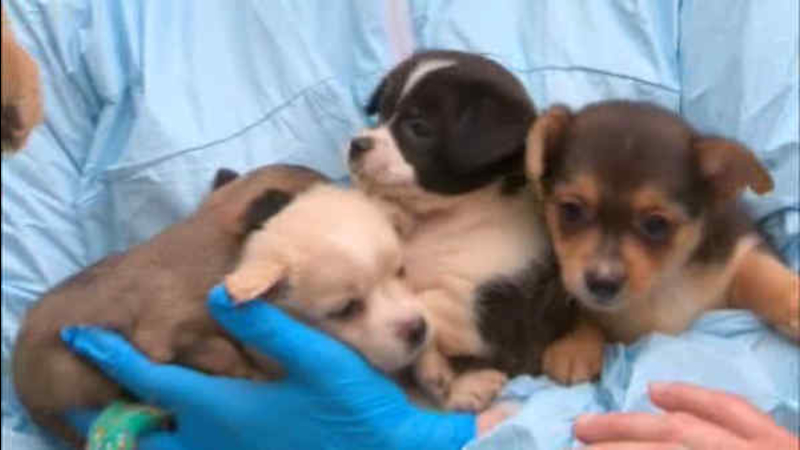 HOWELL, New Jersey (WABC) -- More than 270 dogs were rescued after they were found living in squalor inside a home in New Jersey in what authorities are calling a case of extreme hoarding.

The SPCA and the Humane Society were conducting the investigation on Bennett Road in Howell Township Friday after reports concerning living conditions for an excessive amount of dogs in the home. It reportedly began about a month ago.

Officials described the conditions as deplorable and said that pregnant dogs in the house were currently giving birth.

"One of the statements the owner said, 'well if someone didn't snitch on me, we would still be going on unnoticed, and they saw nothing wrong with what was happening here," Monmouth SPCA Police Chief Ross Licitra.

The operation took nearly the entire day, due to the sheer number of animals found inside the house. Authorities said there were animals in the walls that they had to locate and remove. Some of the animals they believe never left the house.

Neighbors say they have heard barking, but had no idea of the vile conditions in the house. Peter deGrande saw the homeowner just this weekend.

"And I said, what do you need so many dogs? He said, 'my wife loves the dogs', I guess he keeps a happy marriage," deGrande said.

The Howell Police Department was providing traffic control and assistance at the scene.

The homeowners are said to be cooperating with the investigation. They will likely face charges, but for now, the priority is getting the animals into hospitals and then shelters.

Officials say that any viewer out there who wants to help these animals should wait about three to four weeks and then contact Associated Humane Societies or St. Hubert's Animal Welfare Center. Many of the dogs shockingly appear to be in good shape considering the conditions inside this home.

Most of the rescued dogs should be ready for adoption within a month or less from Monmouth County SPCA.