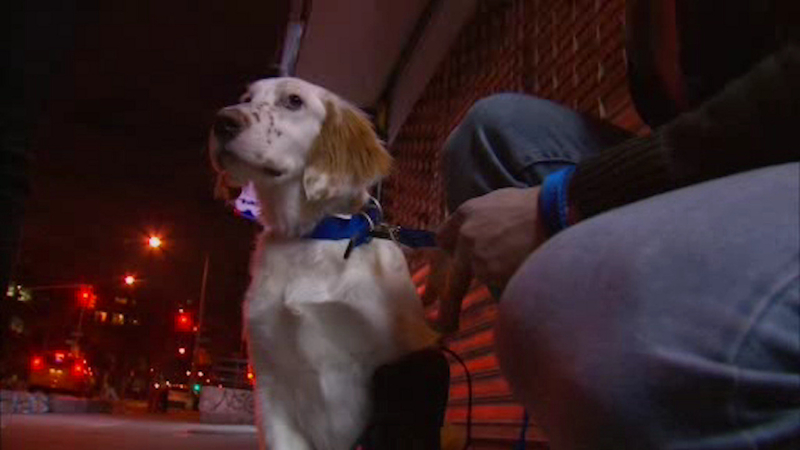 Couple searching for pit bull who attacked their puppy

LOWER EAST SIDE, Manhattan (WABC) -- A pit bull went on the attack, first mauling a small puppy, and secondly, when the pup's owner intervened, the pit bull viciously bit him over and over.

For Christine and Tim, their 5-month-old puppy Barnaby is so much more than a pet.

"He means everything to us, he's the newest member of our family," the couple said.

So when Barnaby was viciously mauled by a pit bull along Clinton Street Tuesday night, Tim Bremer didn't hesitate to jump in between.

"Grabs hold of his paw and I dive over him to get him out of it," said Bremer, the dog's owner. "My hands were just pretty much inside the pit bull."

During the commotion Bremer says the pit bull's owner stood by helpless as he pried Barnaby's injured leg away and chased the terrified pup down the street.

"He just bolted all the way back home and I just ran after him and finally caught up with him. By that time the owners of the other dog had gone away," Bremer said.

"Thankfully the dog didn't break any of Bremer's fingers, but we have had to go get rabies shots because we don't know who the owner is," said Christine Mancuso, the pet owner.

Barnaby now has three fractures in his front paw and isn't capable of walking for at least a month.

Meanwhile, Bremer suffered 23 puncture wounds to his hands and the medical and vet bills between the two are mounting.

"This dog is still out there and so it's scary," Mancuso said.

Bremer and Christine are now hoping the pit bull's owner will do the right thing and come forward, or at the very least take better precautions so something like this doesn't happen again.

"Every time I take Barnaby out I'm worried that around the corner there's going to be this pit bull and I think that there are a lot of dogs and small children in this area and it's really kind of a safety concern," Mancuso said.