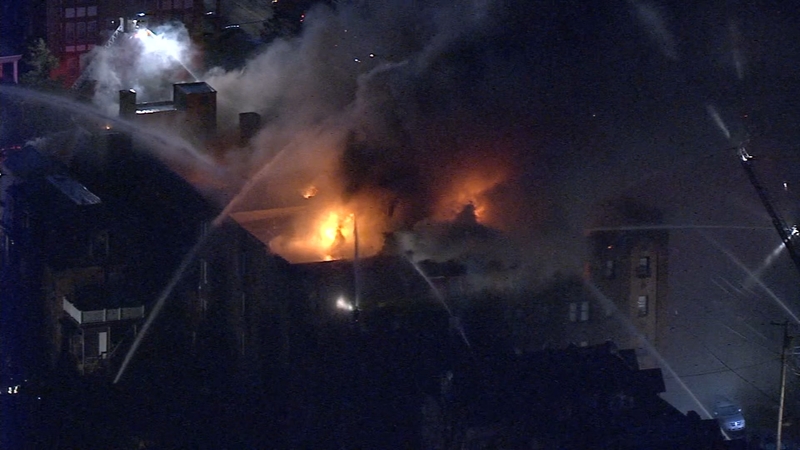 PHILADELPHIA -- It took nearly 200 Philadelphia firefighters six hours of battling heavy flames and icy conditions to place a five-alarm fire under control, but not before it destroyed an apartment building and forced dozens of residents out onto the streets.

Firefighters were relegated to fighting the blaze from the outside amid fears that the building may collapse at any moment, and they doused the roof of the four-story apartment complex in hopes of quelling the flames.

It is believed the fire began on the fourth floor of the building on the 900 block of North 63rd Street around 2:15 a.m. Monday. Officials evacuated adjacent buildings due to the possibility of ongoing collapse, and flames caused the roof to cave in -- which did allow crews to fight the fire from above.

Two firefighters among the approximate 180 called to the scene suffered minor burns and were being treated at the scene.

No serious injuries were reported, but more than 50 residents were displaced by the fire. However, officials say they have not yet been able to confirm that everyone has made it out safely.
EMBED More News Videos

As firefighters worked for hours pouring water onto the multi-alarm fire, the roads surrounding the scene became an icy mess. With fire trucks, emergency vehicles and hoses scattered across the street and now iced-over roads, firefighters were having to maneuver around multiple obstacles while tackling the fierce flames.

Along with the fire personnel, including Philadelphia Fire Commissioner Adam Thiel, numerous agencies responded to the scene.

The fire was placed under control around 8:15 a.m.

"Five-alarm fires are fairly rare," Thiel said. "Our last 5-alarm fire was back in May, 21st and Lippincott, the vacant warehouse."

The American Red Cross is helping those displaced, while the Red Paw Relief is assisting the pets affected by the fire.

Our partners @RedPawRelief are on scene with us at this morning’s 5 Alarm fire on 63rd St in Overbrook. A warming center has been opened at the Barry School, 5900 Race. Red Paw would like to remind you that pets are welcome at city-opened emergency shelters or SEPTA busses pic.twitter.com/mCjDe32Cbz

The Office of Emergency Management is keeping residents aware of the conditions, including road closures and detours. The Streets Department salted the icy roads to help firefighters.

Beyond the possibility of fire damage, neighbors on the block are also dealing with a power outage. There is no word on when the power will be restored.

A warming center has been opened for displaced residents at Commodore John Barry Elementary School located at 5900 Race Street.