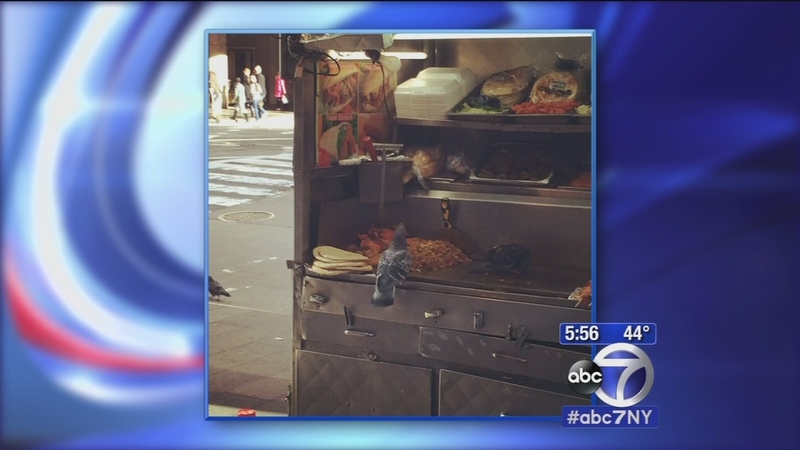 NEW YORK (WABC) -- There's a photo making the rounds that might give you second thoughts about eating at a food truck in New York City.

In this particular case, there were a couple of pigeons that were also dining there.

"I'm actually a food scientist," Midtown resident Sara R. said. "So this kind of freaked me out especially."

So when 23-year-old saw the two pigeons feasting on their fellow fowl -- grilled chicken at a falafel cart -- the only thing she could think of was all the bacteria on their feet.

"There's salmonella...it's disgusting, the range, what it could do to your system," she said. "So it's pretty gross."

The picture, taken two weeks ago along Sixth Avenue near Radio City Music Hall, shows an unattended foot cart with the unwanted visitors and is a clear health department violation.

"I just hope that vendors who this ever happens to pay more attention," Sara said. "Because a lot of people trust the safety of the carts on the street."

Of all the vendors set up along Sixth avenue, there was a big empty spot Thursday. Eyewitness News is told that after the photo was made public, the owner of that cart was a no show.

"People are supposed are supposed to have good food, have healthy food," vendo Amin Marey said. "That's nasty to see it like that."

"The pigeon is standing on the grill, that means the grill is off," vendor Magdy Shahin said. "How is he serving the people with the grill off?"