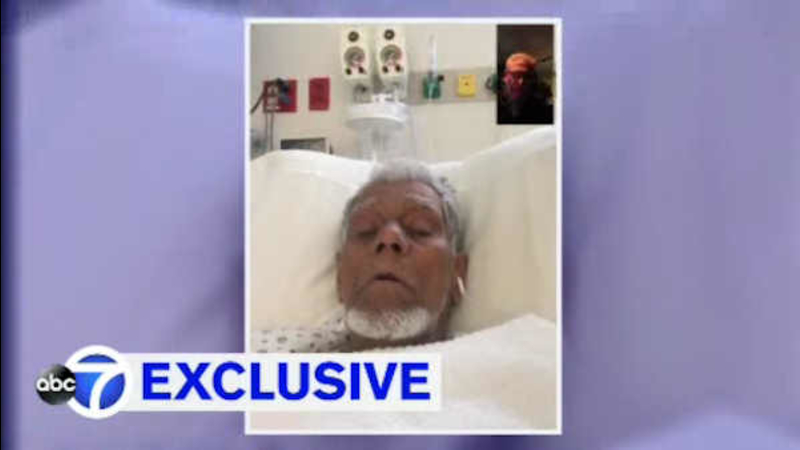 NORWOOD, Bronx (WABC) -- A family wants the owner of a pit bull to be held responsible after it attacked a 72-year-old man in the Bronx.

The attack took place outside a restaurant.

The victim's family is not only worried about his condition, but worried that others could be attacked.

"It's shocking to me and my family," said the victim's son, Rukon Hakim.

His father Abdul lies in Jacoby Hospital, his arm and hand heavily bandaged as a result of a vicious attack by a pit bull, which tore through the flesh to the bone.

"Yes, he says he is in a lot of pain," said the victim's daughter, Shumi Threfdar. She translated for her father as I spoke to them exclusively on Facetime.

Abdul had been walking to his mosque on Monday with his 9-year-old grandson.

"He was walking down the street when suddenly the dog just run and bite him," said Shumi.

Biting him several times and tearing at his arm, causing a deep wound. "After he finished with my dad, biting my dad, he went for my nephew," said Rukon Hakim.

"He was about to bite him so he has to fight the dog to protect his grandson," said Shumi Threfdar.

"This is an ongoing issue that has been happening for some time now," said Aldo Perez with New York Neighborhood Unity Alliance, who says he has seen dogs run loose here on crowded sidewalks.

Abdul says the owner of the dog that attacked him did not try to stop the dog.

"He says he doesn't try to stop it. He has to kick the dog," said Shumi. "Kicking the dog as hard as he could to get himself free."

Rukon tells me the dog was more powerful than the young girl who had hold of its leash.

"The owner turned the dog over to his youngest daughter, who is 12 maybe, and the dog is 15 to 16 pounds more," he said.

Abdul has had one surgery and faces three more, Rukon says.

Now his family wants the dog owner to pay for the mounting medical costs.