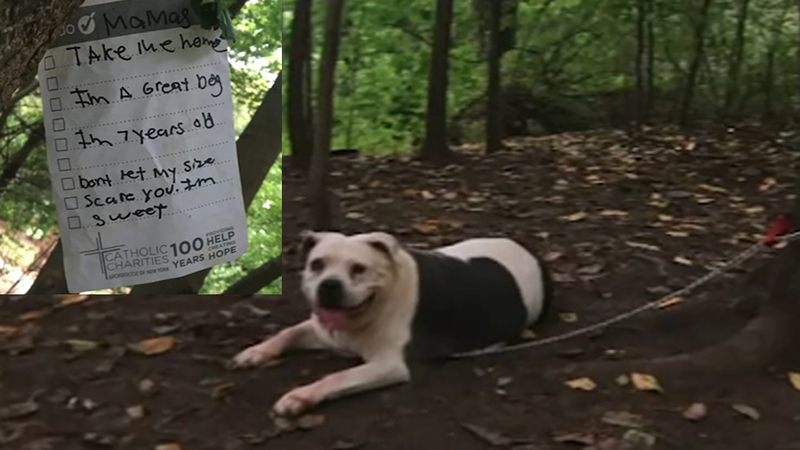 PROSPECT PARK, Brooklyn (WABC) -- A 7-year-old dog is getting nursed back to health after she was abandoned at a park in Brooklyn.

The pit bull was tied to a tree in Prospect Park Monday with a note.

She may be the biggest pit bull you'll ever see, with a heart to match and a bright future thanks to Maus.

He is a full-time screenwriter and part-time dog walker who found her abandoned, without food or water.

Eric was walking two dogs in Prospect Park late Monday when something caught his eye under a tree. As he got closer he realized it was a dog chained up.

"She has these big brown doey eyes, and she was just laying there and it's like she was waiting for someone," he said.

But the owner was nowhere to be seen. "I noticed there was a note in the tree and the note said 'Please take me, I'm 7-years-old, I may be a big girl but I'm a sweetheart', and that's when I knew I needed to do something to help her," said Eric.

He brought her to animal rescuer Sean Casey after reaching out on social media.

"This dog was incredibly lucky," said Casey. "Sadly it's one of the most common things that we see. We get several calls a week for dogs that have been tied out here or cats left in boxes, things like that. And it really is a horrible thing to do."

Eric believes the dog is named "Mamas" because that's what's written at the top of the note.

"Maybe the owner couldn't afford to take care of the animal anymore and so they felt it was right to tie her to a tree and post a note saying please take her," he said.

Veterinarians believe she's suffering from a bladder infection, but seems otherwise in good health, although she could stand to lose a few pounds. Sean Casey says she'll be up for adoption by the end of the week.