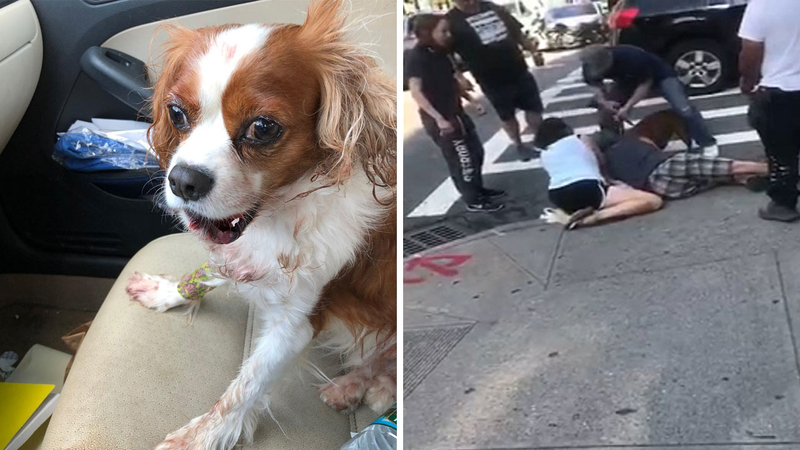 WASHINGTON HEIGHTS, Manhattan (WABC) -- A pit bull viciously attacked a cavalier King Charles spaniel in Washington Heights - and it was all caught on camera.

The pit bull, not on a leash, unleashed a life-threatening assault against the little dog. Now police are searching for the pit bull's owner.

On Thursday morning, the 5-year-old spaniel named 'Buckles' was happily on his way to the park for his walk when they crossed paths with the pit bull on the corner of 180th Street and Pinehurst Ave in Washington Heights. Poor Buckles didn't stand a chance.

Poor Buckles. This adorable Cavalier King Charles Spaniel was attacked by an unleashed pit bull in Washington Heights. The dog clamped down on Buckles’ throat and legs @ABC7NY pic.twitter.com/1RH7tHBSOk

"The other dog came directly toward us and latched onto my dog," said Buckles co-owner, Abby.

Abby also has scratches. She said the pit bull went straight to Buckles' throat and would not let go.

Others passing by tried to help - another woman was able to separate the dogs, but the pit bull kept circling back, also clamping down on Buckles' legs.

One man eventually leashed the pit bull and took it away without a word, while Buckles' owners rushed him to the vet.

Eyewitness News is told that Buckles' jaw was completely destroyed and disfigured in the attack. He has had reconstructive surgery. There are now wires and tubes in his jaw. He is expected to recover, but his owners are concerned he will be scarred with fear.

Buckles is a rescue dog. His owners say he was abused by a previous owner - just when they got him to trust again, this attack happened.