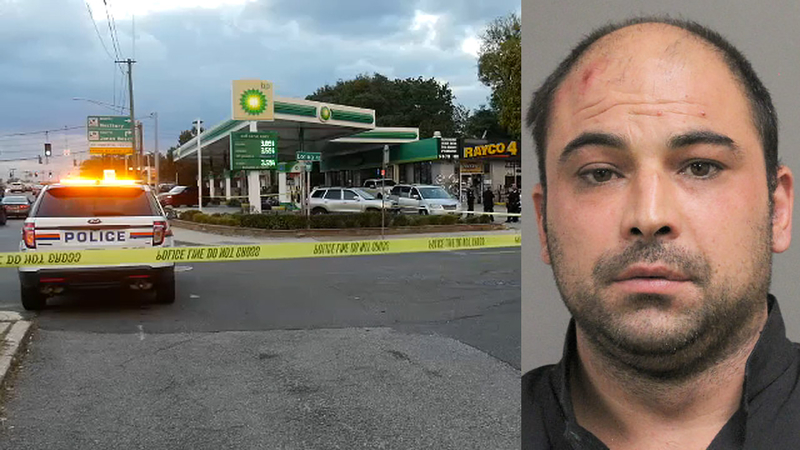 LEVITTOWN, Long Island (WABC) -- A woman on Long Island was viciously assaulted, and authorities say the suspect then attacked police officers who attempted to arrest him.

It started around 3:30 p.m. Tuesday in the vicinity of 2665 Hemsptead Turnpike in Levittown.

Police say the female victim was driving her Chrysler Town and Country with her daughter in the backseat when a man threw a large rock at her vehicle. It struck the minivan, causing damage to the front passenger side headlight and hood.

The victim pulled over, exited her vehicle and questioned the man's behavior, officials said. She was reportedly on her cell phone with 911 when the man approached the victim and punched her in the face.

She fell to the ground, and police say the man took her cell phone from her hand and then punched her in the face, causing her to lose consciousness.

Authorities say she regained consciousness and attempted to get up, but the man continued striking her in the face until other people in the area began yelling at him. He then fled the scene.

The victim immediately went to her car to make sure her daughter was safe.

The woman suffered a leg injury, bloody nose, multiple lacerations to her head and face and numerous lumps and bruises to her forehead. She was transported to an area hospital for treatment. It was later determined she also suffered a concussion.

While canvassing of the area, officers located a man fitting the description of the subject. The man, 34-year-old James Martins, of East Meadow, reportedly became uncooperative and refused to comply with the officer's commands.

Police say Martins then grabbed one officer's shirt and tore off his badge, then continued to disregard commands and struck the officer in the face.

Martins allegedly continued to resist arrest before being subdued. A 49-year-old civilian assisted the police until Martins was handcuffed.

The officer suffered a head injury and was transported to an area hospital for treatment.

Martins is charged with second-degree robbery, second- and third-degree assault, four counts of criminal mischief, endangering the welfare of a child, resisting arrest and unlawful possession of marijuana.

He is being held on $100,000 bail. The public defender representing Martins at his arraignment said Martin has struggled with alcohol addiction, although it did not play a role in the incident.