2 police officers shot at Melrose Houses in the Bronx; officers expected to survive 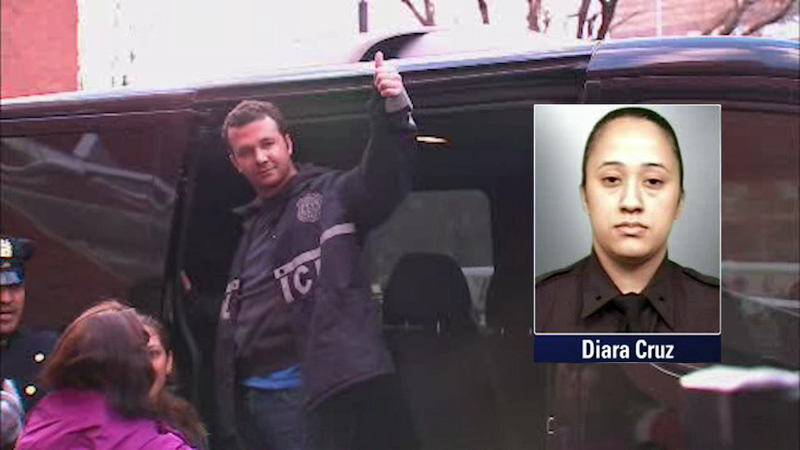 1 NYPD officer released from hospital after being shot in Bronx

MELROSE, Bronx (WABC) -- One of the two police officers who was shot while patrolling a housing project on Thursday night has been released from the hospital.

29-year-old Patrick Espeut was released from Lincoln Hospital Friday afternoon. 24-year-old Diara Cruz, who was also shot remains in the hospital, where she is listed as being in stable condition. Cruz was struck in the torso below the bulletproof vest. Espeut was shot in the cheek. The gunman who apparently later killed himself with the same weapon.

Before Espeut was released Police Commissioner Bill Bratton tweeted pictures of Officers Espeut and Cruz recovering in the hospital.

Officers Espeut and Cruz were on the sixth floor of a building in the Melrose Houses complex at 320 E. 156th St., in the Bronx, just after 8 p.m. when they encountered two people in a stairwell drinking beer, police said. The officers asked the two for identification, and they headed toward the door to the hallway, promising to produce ID in a seventh-floor apartment.

The officers did not know that one of them was carrying both a .32-caliber handgun and a black duffel bag with a sawed-off shotgun inside.

According to the NYPD, at that point, 23-year-old Malik Chavis of the Bronx, fired three shots with the .32 in the area from the stairwell leading to a hallway. Three shots were fired in return by the officers; the male officer who was injured fired two shots and a third officer fired once.

Police said Chavis fled to an apartment, where he knew several people inside, and told them, "I'm about to die ... get out of the room ... I ain't going back to jail." He then shot himself in the head.

Officers responding to the scene found Malik in the seventh-floor apartment dead. A handgun and a shotgun were found inside the apartment, police said.

Chavis, police said, has at least 17 prior arrests, including armed robbery. He was released from prison in December 2014. His girlfriend lives inside the building on East 156th Street.

Two on-duty police officers have been shot in the Bronx tonight. Current conditions are not life threatening at this time. Updates to follow

New York Mayor Bill de Blasio was told about the shooting as he finished his speech and left the stage. He met with the family of one of the officers at the hospital where they were being treated.

"Our brave officers were doing their jobs tonight in our public housing on patrol keeping residents safe," de Blasio said. "Both officers are alert and communicating, and we are praying for the best here."

The shooting happened about 5 miles from where de Blasio was delivering his State of the City speech, much of which was dedicated to praising the work of police officers.

Listen to the audio from the NYPD radio, courtesy of BROADCASTIFY.COM:


The two officers, who are assigned to the Housing Bureau, were each on the force for two years. They were shot while they were conducting a vertical patrol, where pairs of officers start in the lobby of a public housing project and walk the stairwells up to the roof and back down, Tucker said. Both joined the NYPD on the same day in January 2014.

The head of the police officers' union, Patrick Lynch, said the shooting shows the dangerous nature of the job. "We need your support to teach our young folks that pulling a gun on a police officer works for no one," he said. "This goes to show the dangers police officers face each and every day."

He said the shooting shows the difficulty and danger of vertical patrols.

A police officer is on trial for manslaughter in Brooklyn after shooting an unarmed man during a similar patrol in November 2014. Rookie officer Peter Liang had his gun drawn in a pitch-black stairwell at the Louis Pink Houses in Brooklyn when he accidentally fired a shot. Akai Gurley was on a lower floor walking to the lobby and was struck and killed. Prosecutors say Liang was reckless and shouldn't have had his finger on the gun's trigger. Liang has pleaded not guilty, and his defense has suggested he had his gun drawn because of the dangerous nature of the assignment.

Police Commissioner Bill Bratton, who is in San Antonio attending a police chief convention, posted a statement on social media:

Proud of my officers, hopeful for their speedy recovery, grateful for the many expressions of concern and support on their behalf.

The #NYPD truly are New York's finest, and I join all New Yorkers in praying for their recovery.