Investigators believe the fire started with a Nissan parked in the driveway. They say someone set it on fire, possibly to send a message to the rabbi who lives there.

A neighbor's security camera caught the moment that car went up in flames. Seconds later, a man is seen running away.

It didn't take long for that fire to spread to the home on East 17th Street and to two neighboring homes as well. A ball of fire woke up the neighborhood at 4 a.m. on Thursday.

Neighbors identified the man who lives there as Rabbi Jonathan Max.

Now police are focusing their attention on a man who has had a longstanding grievance with Rabbi Max, but so far, they have not named him publicly as a suspect.

It was an act of intimidation, perhaps, or even attempted murder in a neighborhood teeming with the children of large, Orthodox Jewish families.

"When something like this happens, it puts a lot more lives at risk simply because there are a lot more people around," neighbor Ian Strock said.

Neighbors say they are pulling together to help one another. And only somewhat relieved that this was likely not a random crime.

More than a dozen people were injured, including some firefighters, an EMS lieutenant, and a six-week-old baby who took in a lot of smoke. 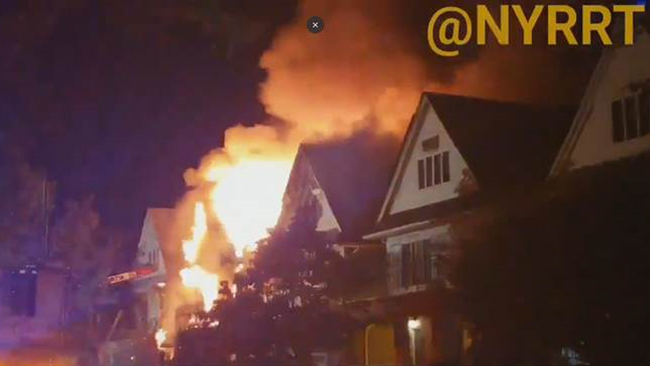