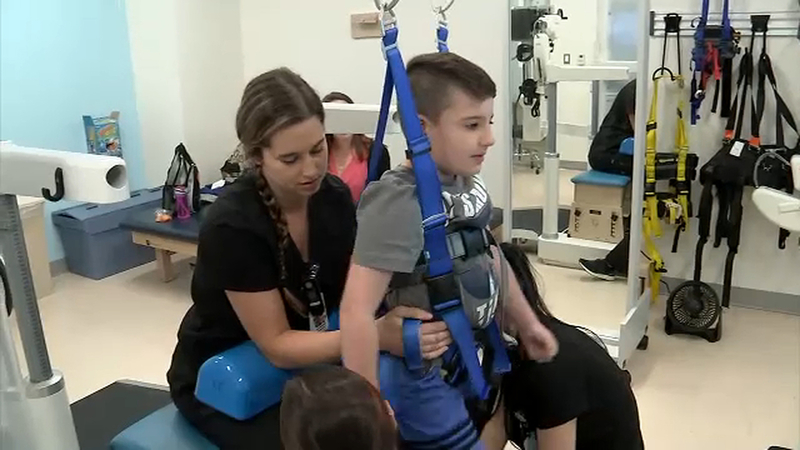 BAYSIDE, Queens (WABC) -- Valerie D'Antonio of Bohemia didn't think much of it when her six-year-old daughter Emma told her last August her leg was bothering her. They got in the car to drive to Pennsylvania for vacation. Emma's leg got worse.

"She kept tripping and falling, and we didn't know what had happened because there was no reason for that to happen, and by the end of the night her leg was just hanging. It looked dislocated," D'Antonio said.

Emma's family rushed her to an emergency room where a doctor gave Valerie D'Antonio alarming news.

"He said, 'If we don't airlift your daughter to a hospital now, she's not going to live through the ride home,'" D'Antonio recounted in tears to Eyewitness News reporter Kristin Thorne.

It was a similar story for six-year-old Austin Bird, of Merrick.

In September, he came down with strep throat, spiked a fever and a few days later he was limping.

"If I asked him to get something, he would start to crawl," said mother Jamie Bird.

Bird called the pediatrician who said Austin had to go to an emergency room right away. By the time Austin got there he began to lose complete control of his arms and legs.

Both Emma and Austin were diagnosed with Acute flaccid myelitis, also known as AFM. It's a rare condition which affects the nervous system, specifically the spinal cord. The condition causes weakness in the muscles and reflexes.

The Centers for Disease Control has reported a large increase in AFM cases since 2014. Still, the CDC estimates that less than one to two in a million children in the U.S. get AFM every year. Little is known about the disease - how it's contracted and how to recover from it.

Symptoms of AFM include sudden onset of arm or leg weakness, difficulty moving the eyes or difficulty swallowing or slurred speech. The onset of AFM is typically preceded by a mild respiratory illness or fever.

Emma and Austin have been receiving a specialized therapy at St. Mary's Hospital for Children in Bayside to help restore movement in their limbs.

The therapy, known as locomotor therapy, is an activity-based therapy to help improve and recover movement in the extremities. It's typically used in patients with spinal-cord injuries. St. Mary's Hospital for Children is the only medical facility in the Tri-State area which offers locomotor therapy.

"We believe that recovery is possible," said Tiffany Damers, the hospital's Director of Rehabilitation Services.

Emma and Austin go to therapy five days a week for 90-minute sessions.

"Everyday there's an improvement of something," Valerie D'Antonio said. "She can hold her head up, her arms. She can lift weights. She can swim. She wants to get better, nothing is going to stop her."

"When he first got out of the hospital, he was very floppy. He couldn't sit on his own. I'd go to give him a bath, and he'd fall over," she said. "He can now sit on his own. He can reach for things. He went on a swing the other day."

The therapy is labor-intensive, requiring four specially-trained therapists per patient.

Damers said four people are currently enrolled in the locomotor therapy program at St. Mary's and three people are on the waiting list. She said the hospital is hiring staff in order to treat more people.